Thanks to Nathalie, Colette, Carlos, Aubrie, Peter and Taylor for sending in their tattoos.  They have been added to the tattoo section of the website. 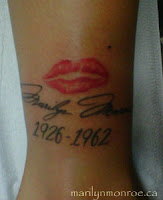 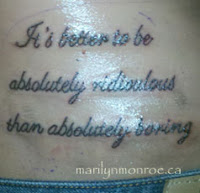 Wishing all of you a very merry Christmas and all the best in 2012! 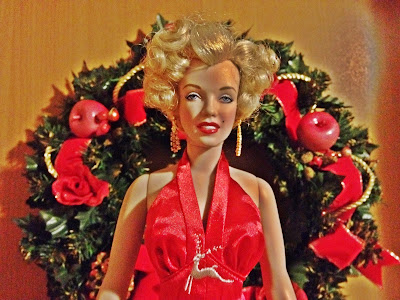 Posted by Melinda at 4:12 PM No comments:

The second part of Debbie Reynolds collection was sold today at auction by Profiles in History.  As you may recall the first auction included the white seven year itch dress which sold for 4 million dollars.  In fact, all of Marilyn's dresses went for over $500,000.  It is surprising to me that the dresses sold today only reached half of that.  Perhaps it is because this second auction was not publicized as much as the first one.  Maybe the white dress was such a big draw that it brought attention to the other costumes being sold at the same time.

Description:
This is the signature costume for Marilyn’s character “Cherie”, the naïve yet determined saloon singer heading for Hollywood in Joshua Logan’s romantic Western from the play by William Inge, Bus Stop. It is also one of the most iconic and indelible looks from her entire career, being a top choice for publicity images of Marilyn even to this very day. In it, she performs (intentionally naively) “That Old Black Magic”, winning the heart of the handsome and rather eager cowboy played by Don Murray. This was to be the last of the great collaborations between Marilyn and her favorite costume designer, William Travilla. TCF handwritten label “Marilyn Monroe A-769-03”. Exhibits sequin loss along neckline and minimal sequin loss on bodice, and straps have been replaced. 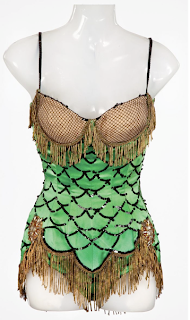 Description:
Elegant, two-piece evening gown designed by Travilla of an aubergine steel gray couched in meandering-pattern braid and accented by two aubergine satin trains flowing from the waist. Handwritten studio tag inside dress reads “1-27-3-7914 M. MONROE A-698-53,” and jacket has handwritten label “1-41-2-0570 Marilyn Monroe A-698-16.” Worn quite memorably by Miss Monroe for several scenes, from her clever efforts to remove Elliot Reid’s clothes in order to search them, to being stuck halfway through a porthole, requiring rescue by her youngest suitor Mr. Henry Spofford III (age 9, going on 21). Material on waist is detached two inches, else Fine as screen-worn. 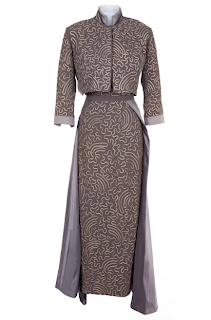 Description:
Pale green silk pleated strapless dress adorned with rhinestones (a few of which are missing). TCF label handwritten “F-13 M. Monroe”. Designed to be unbearably sexy without also being un-releasable due to censorship, a condition several earlier costumes designed for Marilyn suffered from. Worn for the title number, in which Marilyn offers herself upon a mid-century-modern stage of cross-rotating apartment flats, first to Frankie Vaughan, then Yves Montand (in his fantasy sublimation). This timeless creation by Dorothy Jeakins remains one of the most attractive costumes ever created for this legendary actress. 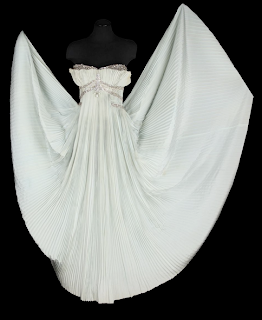 Description:
Light aqua two-piece raw silk suit with Monroe Lloyd of California label. A rather conservative look for Marilyn, which was deliberately chosen by her character as Joseph Cotten’s unfaithful wife, off to an illicit rendezvous with her lover under Niagara Falls in Henry Hathaway’s Niagara. The indelible image of Marilyn’s hips swinging as she walks away in this form-fitted outfit is considered one of the great “sex in cinema” sequences released during the height of the censorship Production Code. This 2-piece suit was modified under Dorothy Jeakins’ direction from an off-the-rack couture ensemble. Shoulders exhibit light soiling, and skirt has 2 in. tear at split, otherwise Fine as screen-worn.