Smash becomes the network's second pickup this season (behind fantasy procedural Grimm) under new entertainment topper Robert Greenblatt, who brought the series about the making of a Broadway play about Marilyn Monroe with him to the network after departing Showtime.

The series, which received heavy promotion on NBC during the Super Bowl, opened strong out of the gate for the fourth-place broadcaster in February and has been considered a passion project -- and big bet -- for Greenblatt.

The musical drama starring Katharine McPhee and Megan Hilty ranks as the network's No. 1 drama in the advertiser-coveted adults 18-49 demographic and total viewers. The series is up 160 percent in the demo when compared with the network's season average in the 10 p.m. Monday slot, averaging a 2.6 rating vs. 1.0 when factoring in Live Plus Same Day viewership. In total viewers, Smash is up 100 percent in the slot (7.7 million total viewers vs. 3.9 million.)

An NBC spokesperson notes that it's unclear how many episodes Season 2 will have.

The executive, as well as series creator Theresa Rebeck, told reporters at the Television Critics Association press tour in January -- ahead of its February bow -- that she already had a plan for Season 2.
"The second season, if we're lucky enough to get one, would be Marilyn comes to Broadway and how it fares in New York," she said at the time.

Asked if there could be a new play that begins being workshopped should the series earn a renewal, Greenblatt later told reporters in January that it was unclear. "The Season 2 plan is Marilyn goes to Broadway, and after that we'll decide if a new show should emerge," he said. Added EP Marc Shaiman: "The show itself is telling us; it's not like we don't think ahead. What we thought nine months ago is changing week to week as the actors bring what they bring."

CMG Worldwide, an Indiana-based licensing agency that represents the estates of many deceased celebrities, is suddenly on a different end of the right-of-publicity spectrum.
For years, the firm has been aggressively protecting deceased celebrities' publicity rights, representing such notables as Natalie Wood, James Dean and Andy Kaufman. Because the firm helped lobby the state of Indiana to pass generous laws protecting the likeness of these stars for 100 years after death, CMG has been able to gain significant licensing income from commercial endeavors, even at times over first amendment objections.

CMG's prized client for many years was Marilyn Monroe, but the relationship ended in 2010 after her estate sent CMG a termination letter. The parties reached an agreement, but the divorce hasn't gone smoothly, and now CMG is suing the estate, saying it's being threatened with legal action over its alleged continued exploitation of the late actress.

The new lawsuit comes as the Monroe estate stands up on its own.

Previously, a judge found that Monroe was domiciled in New York at the time of her death, which meant that she wouldn't enjoy publicity rights as broad because New York's laws aren't as generous to dead celebrities as Indiana's. In that case, the estate was taking on the estate of photographer Sam Shaw, who had snapped many famous images of Monroe during her lifetime. The transfer of the lawsuit to New York hurt the case and possibly hurt the estate's relationship with CMG. Eventually, Monroe's estate made a $3 million settlement with the photographer's estate and got exclusive rights to images of the blond bombshell.

Before CMG and Monroe parted ways, the firm was the estate's agent in similar litigation and other deals. In 2008, during the midst of a legal battle with One West Publishing ("One"), owners of copyrighted images of Monroe from photographers George Burris and Andre De Dienes, CMG says it paid $325,000 to settle the case. As part of the deal, it became One's licensing agent.

When the Monroe estate terminated its relationship with CMG, the parties allegedly reached a deal whereby CMG would return certain assets, including the Monroe website and Facebook page, for a cash payout.

The following year, CMG sued the estate to enforce the terms of the termination agreement. The case settled.

Neither the termination deal nor the settlement agreement is said to have addressed CMG's representation of One. CMG believes that it is permitted to carry on its work there so as to recoup its expenses to settle the One litigation.

This month, CMG got a cease-and-desist letter from the Monroe estate over its licensing and display of Marilyn Monroe products and services.

On Wednesday, in a very odd twist, CMG filed a new lawsuit against the Monroe estate in New York federal court, seeking a ruling that it hasn't done anything wrong with Monroe's likeness.

-by Eriq Gardner (Hollywood Reporter)
Posted by Melinda at 11:11 AM No comments: 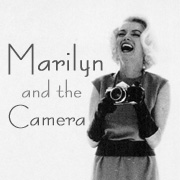 As some of you are aware, the company that purchased the rights to Marilyn Monroe is beginning to flex its muscle on Facebook and Twitter.  Authentic Brands Group (ABG) has begun to remove any pages and ban users who are using the name Marilyn Monroe.  It does not matter if the page is not commerical and simply fans sharing their love and passion for Marilyn.  They have an official Marilyn Monroe page on facebook and twitter and they are attempting to funnel all fans to use ONLY these pages.

Due to this activity I have decided to change the title of my facebook page to Marilyn and the Camera and I will be removing my old page. I want to thank everyone who has taken the time to like my page in the past and I hope you will do the same now.

P.S.  I have had some inquires as to whether I plan to change the domain name for my website.  I have no plans to do this but it remains to be seen whether ABG will leave me alone.  I imagine when they are done getting their way on facebook and twitter they will start to target Marilyn website but that remains to be seen at this point.
Posted by Melinda at 4:06 PM No comments:

Whitey's Money Clip Up For Auction

The History of the Money Clip
In preparation for Marilyn's funeral, Allan "Whitey" Snyder did her makeup for the last time.  A flask of gin fortifying him enough to carry out a promise he had made in jest many years earlier, and of which Marilyn had reminded him with an inscription on a gold money clip she gave him, saying, "Whitey Dear, While I'm still warm, Marilyn."

This amazing piece of Marilyn history is going to be auctioned off through Juliens Auctions on March 31, 2012.  It is shocking that Snyder's family does not want to hold onto this.  The estimate is $6,000-8,000 but I can't imagine it going for so little.


A Tiffany money clip, stamped 14K, gifted to Allan "Whitey" Snyder by Marilyn Monroe. The clip is engraved "Whitey Dear:/ While I'm still warm/ Marilyn." Snyder, already a successful Hollywood makeup artist, first worked with Monroe during her 1946 screen test with 20th Century Fox, which resulted in her first studio contract. Snyder went on to become Monroe's on-screen and personal makeup artist. Monroe and Snyder developed a close friendship during their 16-year association, so close in fact that Monroe made the macabre request that Snyder do her makeup for her own funeral should anything ever happen to her. Snyder's glib response: "Sure, bring the body back while it is still warm and I'll do it." Not long after that Monroe gave Snyder this money clip. In 1962 Snyder sadly kept his promise of preparing Monroe's final makeup. Accompanied by a Tiffany cloth holder; a letter from Westwood Memorial Park thanking Snyder for his cosmetic work and for being a pallbearer at Monroe's funeral, with original transmittal envelope; a black and white photograph of Snyder and the other pallbearers carrying Monroe's coffin; and an article from The Enquirer that shows the pair together and discusses the promise Snyder made to Marilyn and her gift.
2 1/4 by 1 inch
PROVENANCE From the Estate of Allan "Whitey" Snyder