Rare Marilyn Candids Up For Auction

It still amazes me that new photos of #MarilynMonroe continue to come to light.  The latest shots are coming up for auction at Profiles in History on July 28.  They were taken when Marilyn was married to Arthur Miller.
The most touching to me was the shot of Marilyn on the beach with Arthur's children.  She looks so happy. 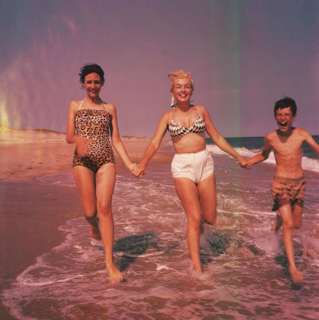 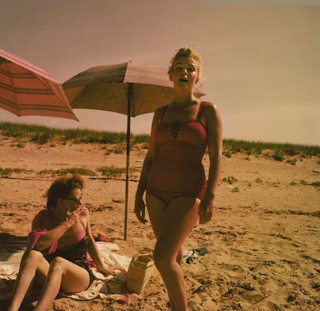 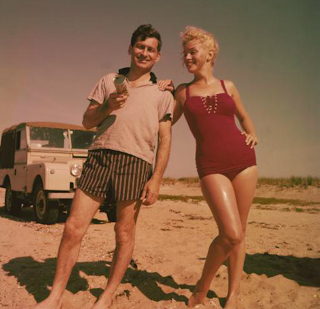 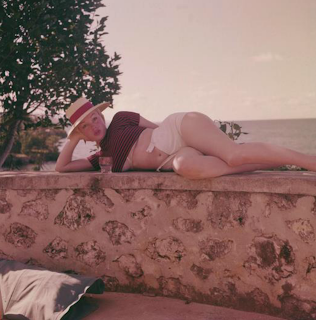 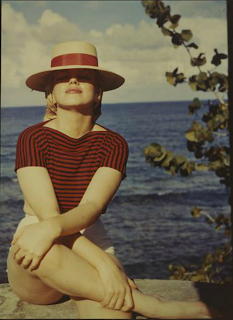 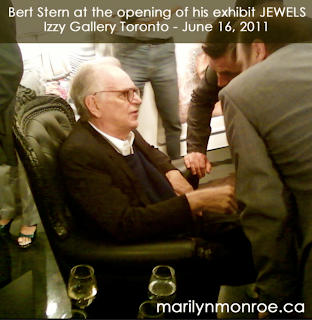 Bert Stern, a commercial photographer best known for his images of Marilyn Monroe in what became known as The Last Sitting, and the documentary Jazz on a Summer's Day, has died in New York City. He was 83.
Stern died Wednesday at his Manhattan home, said Shannah Laumeister, 43, a filmmaker who said the two were secretly married in 2009. She said the reason for keeping it secret was private.
Stern shot thousands of pictures of Monroe at the Bel Air Hotel in Los Angeles in 1962 for Vogue magazine just weeks before her drug overdose death. They included nude and semi-nude images.
The 2,500 images, including ones Monroe rejected, were published in a 1982 book titled The Last Sitting, and a second book, Marilyn Monroe: The Complete Last Sitting, that came out in 2000.
In Bert Stern: Original Madman, a documentary Laumeister made of the photographer, Stern said, "It was a one-time-in-a-lifetime experience to have Marilyn Monroe in a hotel room, even though it was turned into a studio."
"She was so beautiful at that time," Stern told Newsday. "I didn't say, 'Pose nude.' It was more one thing leading to another: You take clothes off and off and off and off and off. She thought for a while. I'd say something and the pose just led to itself."
He photographed many other celebrities, too, including Audrey Hepburn, Elizabeth Taylor and Truman Capote.
"He was an enormously innovative photographer, both as a commercial photographer and a photographer of celebrities and fashion models. And one of the great people in his field," said Bruce Barnes, director of the George Eastman House in Rochester, N.Y.
Jazz on a Summer's Day, Stern's only documentary, was released in 1959. The film, about the 1958 Newport Jazz Festival, was one of the earliest live concert movies as well as one of the most influential. In 1999, it was added to the National Film Registry in recognition of its historical significance.
Stern was born in Brooklyn on Oct. 3, 1929. In a 1968 interview with Newsday, he said his father was a children's portrait photographer. After dropping out of high school in his senior year, he served in the Army, working as a photographer on a base in Japan.
That experience helped him land a job in the mailroom at Look magazine, where he became a protege of Hershel Bramson, the art director, who would later give him his first job as a commercial photographer.
He launched his career with his first ad campaign, for Smirnoff Vodka, that featured a V-shaped glass of vodka set in the front of an Egyptian pyramid.
"He'll be remembered as someone who loved women and loved taking pictures and putting things he felt strongly about in the camera," Laumeister said. "His images will live forever and wow generations to come."
The Monroe images "go beyond the photograph and become a work of art," she added.
Stern was among a generation of photographers, including Irving Penn and Richard Avedon, who were known for their uncluttered and alluring images.
"He's not quite as well known but fits into that group for revolutionizing the way celebrities were photographed," said Jessica Johnson, assistant curator at the George Eastman House.
The Associated Press, with files from the New York Times
Related Blog Post: I MET BERT STERN!
Posted by Melinda at 5:47 PM No comments: 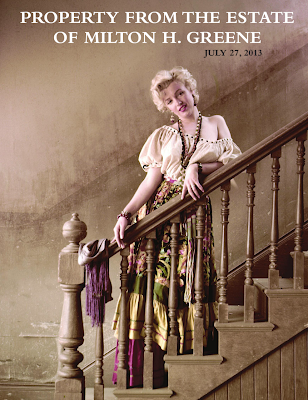 There is an auction coming up on July 27 through Profiles in History of Milton Greene photography.  It will feature many rare photos of Marilyn Monroe.

If you are interested in purchasing one of the limited edition catalogue's you will need to call in your order to 310-859-7701.  They are $50 and that includes shipping anywhere.

The catalogue looks beautiful.  You can flip through an online version here.  They are currently being printed and are expected to ship this week.  Can't wait for mine to come.

There were many questions raised when this auction was announced.  The photographs are being sold with copyrights - meaning they can be reproduced for profit.  The Marilyn community was shocked to think that Milton's Estate was selling off its catalogue of Marilyn images.

Thankfully, this is not the case.  Here is a message that was posted by Milton's son, Joshua Greene.

"I HAVE BEEN ASKED TO EXPLAIN WHAT IS GOING ON WITH THE UPCOMING AUCTION WITH PROFILES. IN 2000 WHEN I SEPARATED FROM A ABUSIVE BUSINESS RELATIONSHIP I HAD WITH VERY UNSAVORY PARTNERS. I WAS FACED WITH SPLITTING UP MY FATHERS BODY OF WORK AND GRANTING THEM THE COPYRIGHTS, A DECISION I REGRETTED EVERYDAY. I OFFERED MY GREEDY X PARTNERS 1.2 MIL & IT WAS NOT ENOUGH!!! SO IT SAT IN A VAULT IN NYC TILL 2005 WHEN THEY SOLD IT TO THE CURRENT OWNER FOR 500K. GO FIQURE.

THE BOTTOM LINE THE MM WORK IS MEDIOCRE AT BEST. THE BULK OF IT IS FROM THE SET OF BUS STOP & PRINCE, THAT IS WHY THE QUANTITIES ARE SO HIGH. THERE IS VERY LITTLE OF THE OTHER MM SITTINGS AND THEY ARE OUT, OUT, OUT, TAKES.

THE REAL ISSUE IS THAT IT IS HIS LIBRARY OF ALL THE OTHER PERSONALITIES AND FASHION HE DID OVER HIS LIFE TIME. SINCE I ALREADY OWN THE BEST OF HIS WORK WHICH IS 40 % OF THE COLLECTION INCLUDING THE BEST OF MM MY INTERESTS ARE IN THE OTHER WORKS FOR PERSONAL REASONS.

AS SAD AS THIS IS MAYBE IT WILL COME BACK HOME WHERE IT BELONGS.

THOUGHT YOU ALL SHOULD NO THE FACTS."

Posted by Melinda at 7:33 PM No comments: 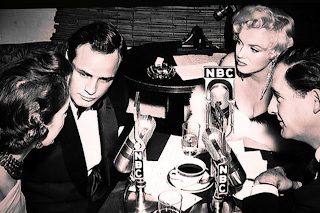 Here is an amazing audio interview where Marilyn discusses the Actor's Studio with Marlon Brando at the premiere of "The Rose Tattoo" in 1955.

Marilyn starts speaking 10 minutes in to the video. 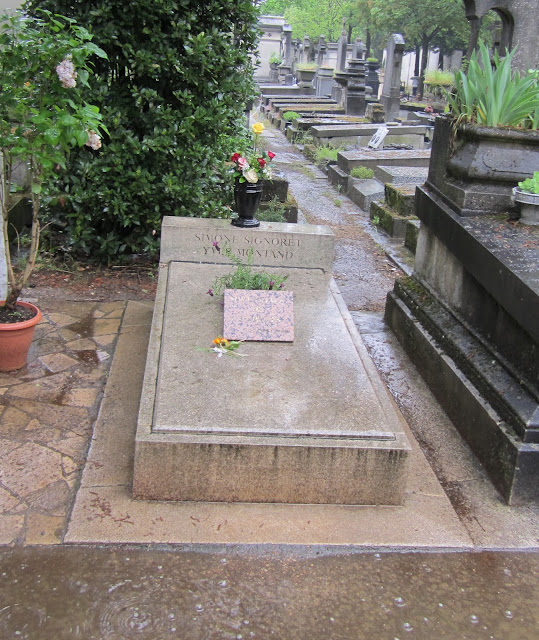 Thanks to John Wright for sending along this photo he took during his trip to Paris.  It is the final resting place of Yves Montand and Simone Signoret.

It is located at Pere Lachaise cemetery, Paris.

If you are interested in hearing some interviews with Yves and exerpts from his autobiography here is a link to one of my best of podcast episodes featuring Yves.

These are so cute, I had to share.  It is a neat piece of Marilyn art with that geeky vide.  Perfect for Marilyn Geeks out there!

Available on amazon through the below link.

Tonner Dolls has released yet another Marilyn doll.  This one is a web exclusive and is limited to only 150 dolls.  It is based on Marilyn singing "Heatwave" from There's No Business Like Show Business.

The details of this outfit look amazing!  They really seemed to spend the time getting it right.  I am thrilled that they are continuing to release ORIGINAL Marilyn outfits that have not appeared on other dolls before.

The fun of the Tonner dolls will be the ability to pose her - especially in this outfit.  Let's hope they keep them coming!

What other outfits would you like to see Tonner Release?  I'd like to see a "My Heart Belongs to Daddy" doll. 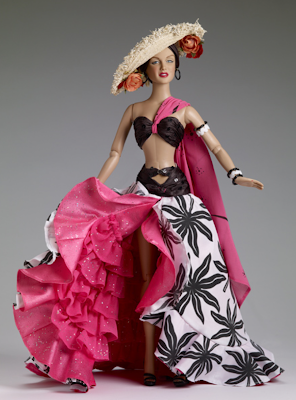 Posted by Melinda at 6:00 PM No comments: