I have updated the "Shrine" section of my website here.  Things sure have changed.  Hope you guys enjoy it.  Feel free to leave comments below. 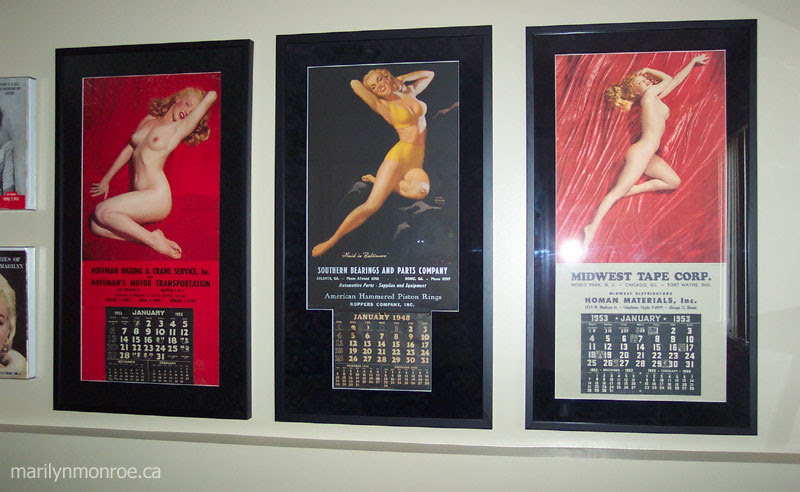 I have added some gorgeous tattoos to the website here

Thanks to Chrissy, Veronica, Sami and Chris for sending theirs in.  I also added Lindsay Lohan's Marilyn quote tattoo.   It isn't what was heavily reported in the press. 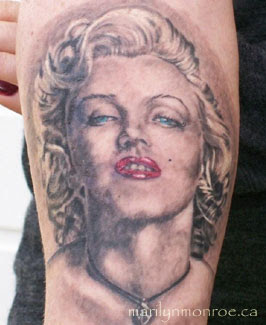 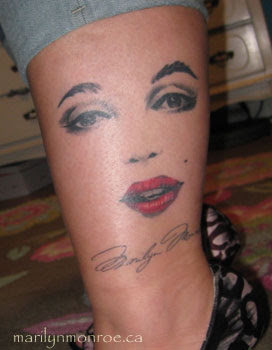 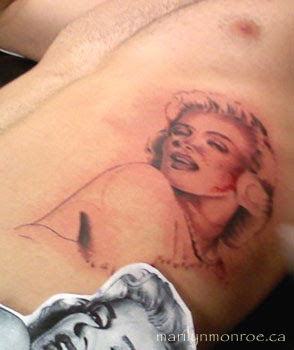 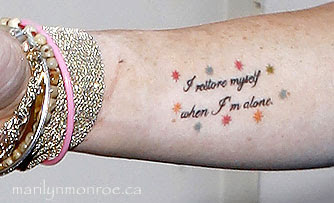 Posted by Melinda at 1:55 PM No comments:

As some of you are aware I moved into a new house a couple months ago and I have a new Marilyn room.  I'll post some photos here shortly.  In the meantime, here is a teaser....just a peek in the door :) 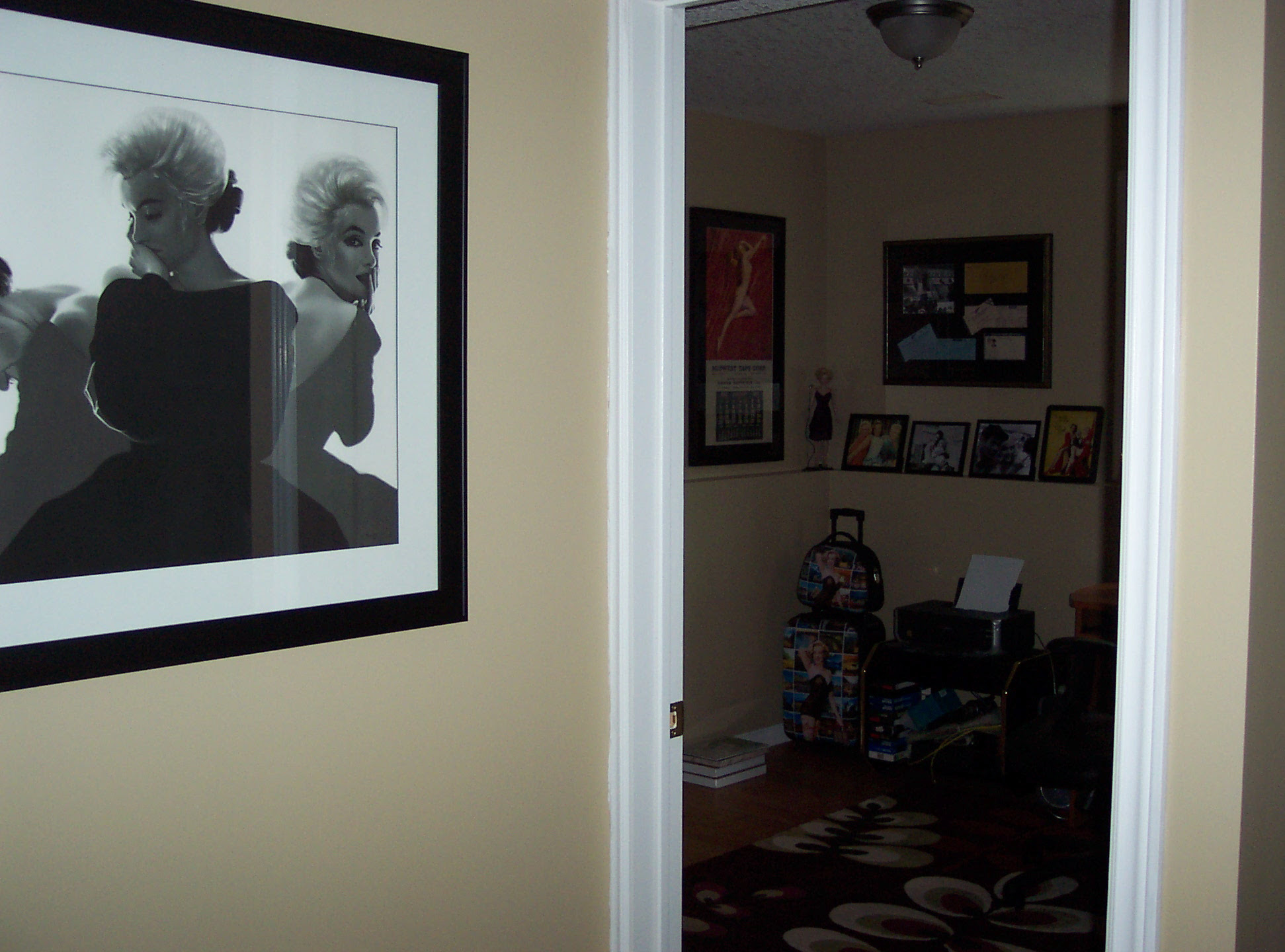 Crypt above Marilyn Monroe's for sale on Ebay

NOTE:  THE WINNER BID OF 4.5 MILLION WAS CANCELLED BY THE HIGH BIDDER

For Sale: Eternity with Marilyn Monroe

Elsie Poncher wants to sell the crypt, now occupied by her husband, above the actress to help pay off her Beverly Hills mortgage. Her starting price on EBay: $500,000.

HERE IS THE EBAY AUCTION 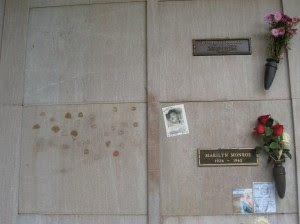 The onetime Beverly Hills resident, who died 23 years ago at the age of 81, will be moving out of the crypt above Marilyn Monroe's resting spot at the Pierce Brothers Westwood Village Memorial Park cemetery. Poncher's wife intends to sell the crypt, said to have once been owned by Monroe's former husband, Yankee great Joe DiMaggio.

So although the plaque on Poncher's crypt reads: "To the man who gave us everything and more," his wife, Elsie, is hoping that he has just a little more to give. She wants to use the money to help pay off the $1.6-million mortgage on her 1 3/4 acre Beverly Hills home.

"I can't be more honest than that," she said. "I want to leave it free and clear for my kids."

Elsie Poncher plans to start the bidding at $500,000 when she places the crypt on EBay, making it -- on a per-square-foot basis -- one of the most expensive pieces of real estate on the market.

Richard Poncher was a serial entrepreneur, to hear his wife tell it, who made a fortune with a variety of electronics firms and once sold surplus U.S. Army airplanes and parts. She claims that he built two bulletproof cars for Al Capone and owned 12 Rolls-Royces in his lifetime.

"He wasn't afraid to tackle anything," Elsie said. "Besides that, he was a helluva nice guy."

She said they lived a colorful, outsized life after meeting in Chicago and moving West. "He knew all the gangsters," Elsie said.

They ate at the legendary Los Angeles restaurants that catered to Hollywood -- the Brown Derby, Chasen's and Perino's. They owned an apartment at the Peninsula Hotel in Hong Kong.

The house where Poncher's widow still lives is something of a museum, with a Picasso drawing tucked away in a back hall and signed prints by him and Chagall on the living room wall. When she brings out a photo of her husband dressed in a conservative black suit and her wearing a saucer-sized pendant with rubies and diamonds, she tells a story of how it came from a deal her husband did with a relative of King Farouk of Egypt.

Elsie said her husband bought the crypt from DiMaggio during his 1954 divorce from Monroe. She doesn't remember Poncher being particularly enamored of Monroe. The actress didn't commit suicide until 1962, so Poncher had no idea what an icon she would become in death or that she'd someday be entombed at the Westwood cemetery.

Elsie isn't sure how her husband knew DiMaggio.

"He knew a lot of people," she said with a wave of her hand.

The couple were at the Regency Hotel in New York talking to DiMaggio, she said, when the retired ballplayer asked, "You want to buy two crypts?"

"Who the hell wants two crypts?" her husband replied.

He must have had a change of mind, because he bought them, one for him and one for his wife.

Elsie, wearing gray sweats and with long pink fingernails, admits to being in her 70s but is quick to add, "I do 20 laps in the pool every day." She said that when she sells the crypt, she'll put her husband's remains in the one reserved for her, and when her time comes, she'll be cremated.

This will be the second time that Poncher's long sleep has been disturbed.

When he was dying, Elsie said, her husband approached her with a request. "He said, 'If I croak, if you don't put me upside down over Marilyn, I'll haunt you the rest of my life.' "

Right after the funeral, Elsie said, she told the funeral director of her husband's wish. "I was standing right there, and he turned him over," she said.

The cemetery, which is hidden away off Glendon Avenue, is the final resting spot for many celebrities, among them Natalie Wood, Dean Martin, Rodney Dangerfield, Merv Griffin, Mel Torme, Truman Capote and -- most recently -- Farrah Fawcett.

Monroe, though, is the most popular. Admirers leave roses and lipstick marks on the crypt, marked with a simple plaque, "Marilyn Monroe 1926-1962." For several decades, DiMaggio had a dozen roses delivered regularly to the crypt.

Jolene Mason, general manager of the cemetery, said there still is one empty crypt in the Corridor of Memories Mausoleum where Monroe and Poncher are buried. It is located two spots above the actress and to the left. It can be yours for $250,000.

Playboy's Hugh Hefner bought the crypt next to the actress in 1992 for $75,000. He said he has many friends buried there, and living close by, it's almost the neighborhood cemetery.

"I'm a believer in things symbolic," he said. "Spending eternity next to Marilyn is too sweet to pass up."
Posted by Melinda at 10:57 AM 1 comment: