It has taken some time to get this section finished but finally I can share with everyone what I purchased at the June 2008 Julien's Auction!

Marilyn's Jay Thorpe Hat has been added to MY COLLECTION. 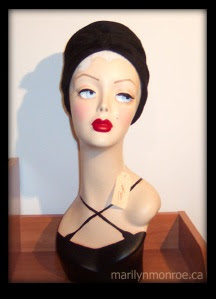 Posted by Melinda at 5:30 AM No comments:

I added a couple of tattoos by Las Vegas artist Robert Pho. 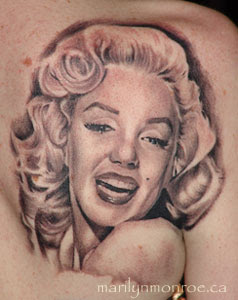 Posted by Melinda at 5:27 AM No comments:

The Marilyn you don't know

Marilyn appears on the cover of Parade Magazine for Sunday July 27, 2008.  This is one of the best article's about Marilyn that I have ever read.  Liz Smith has always been a champion of Marilyn's and this article proves it.  Every Marilyn fan should read this and pass it on to their friends.  This is what I wish everyone knew about her. 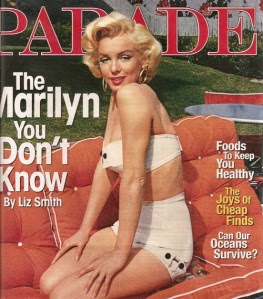 That was Marilyn Monroe in 1955, the year of her great rebellion against Hollywood.

Almost five decades after her death on Aug. 5, 1962, Marilyn’s hold on the collective imagination is stronger than ever. As I write this, we are coming off a Marilyn “sex tape” rumor and the reality of wonderful, newly found footage from the set of The Misfits. As the anniversary of her death approaches, there will be TV specials and feature articles on this ultimate sex symbol. And the word that will be used most frequently to describe her is “tragic.” The tragic childhood, the tragic life, the tragic death. Her beauty and poignancy will be noted. Her love affairs, real and rumored, will be rolled out. Few will remember the Marilyn of 1955. Well, I prefer that empowered woman.

Just as it was easy to type Marilyn during her life, it is easy to see her now entirely as a victim—of men, of the sexually repressed era in which she blossomed, of her own personal shortcomings. And indeed she was troubled. All who knew her well saw her suffering. But they also saw something else—that the soft, yielding, funny, deliciously flamboyant image she created was, in fact, her great professional achievement. As the photographer Richard Avedon put it shortly before his death, “People don’t realize it, but she invented Marilyn Monroe.”

The private Marilyn had some of the same qualities with which she imbued her screen characters—a certain vulnerability and, as the years progressed, a palpable sadness. What the public didn’t see was a blazing ambition, a genuine toughness, native intelligence, and a desire that was never quenched—not even in her final frantic year of life—to lift herself up. Marilyn’s intellectual curiosity, her desire to be an actress worthy of respect, was considered hilarious. She was blond, she was beautiful, she was a movie star —what more could she want? What more could any woman want? This put-down was one of the great mysteries of her life, and one which bedeviled her to the end. “Please don’t make me a joke,” she said in her final magazine interview in 1962.

The popular notion of Marilyn is that she staggered through life in a drug-addled haze, a miasma of neurosis and helplessness, and that at the end she was the mentally unstable, blond cog in Byzantine murder plots involving (pick one) the Kennedys, the CIA, the FBI, the Mafia, her therapist, her housekeeper.

What escapes conspiracy theorists and those who prefer Marilyn as a mess in a beaded dress is that all her life she was a working woman—from the enforced drudgery of orphanages and foster care to marriage at barely 16, to factory work, and then to modeling. From age 22 to 36, she was an actress. Her childhood had saddled her with conflicting traits. She was torn by crushingly low self-esteem, a resistance to certain kinds of discipline, and an unstoppable desire to be more than her origins predestined.

When she began modeling at 18, Blue Books Modeling records described her as unusually photogenic—“Eyes: Blue…Bust: Excellent…Teeth: Perfect.” But even more impressive was her desire to improve herself. Reflecting years later, the head of the agency stated, “A lot of them ask, ‘How can I be like Marilyn Monroe?’ But there’ll never be another like her. No one ever worked harder or had more belief in herself.”

When the movies called, Marilyn began timorously. Twentieth Century-Fox dropped her after a year and a walk-on. Signed by Columbia, she was fired after resisting the advances of studio head Harry Cohn. She was asked then by a friend, “What if 90% of everybody in Hollywood told you to give up?”  Marilyn replied, “If  100% told me that, all 100 would be wrong.”

Marilyn was on the slow track to nowhere. Then she met agent Johnny Hyde, 30 years her senior. He had helped discover Rita Hayworth and Lana Turner. Marilyn did not resist his advances. Hyde respected her ambitions—to be famous, to be whole. He left his wife for Marilyn and wanted to marry her. She refused. She loved him but was not “in love.” And when it was suggested she could be the very rich Mrs. Johnny Hyde, she said, “But I would be taken even less seriously than I am now!” She was the opposite of the gold diggers she would come to play.

Eventually, a small but showy role in All About Eve attracted public attention. And just to prove she was really a good girl with a body she couldn’t help, she began dating baseball icon Joe DiMaggio. Surely, if Joltin’ Joe thought she was OK…

Her movie career suddenly went into high gear: Don’t Bother To Knock, Monkey Business, Niagara, and, finally, the role she was born to play, Lorelei Lee in Gentlemen Prefer Blondes. Now she was a star. Marilyn decided it was the perfect time to marry DiMaggio. So they wed, to screaming headlines. The couple traveled to Japan for their honeymoon, where DiMaggio was distressed to be pushed aside while thousands literally rioted for his bride.

Back in Hollywood, Marilyn found herself married to a man who resented her stardom and loathed her image. “Who did he think he married when he married me?” she would ask friends. Her relationship with her studio grew rockier as well. While making The Seven Year Itch, she fought with Joe, and they soon separated. Then came the release of There’s No Business Like Show Business. She was criticized for vulgarity. Marilyn realized her career would be over if she continued to give in to what Hollywood asked of her. After rejecting another script, she flew to New York, declared herself free from Twentieth Century-Fox, and formed her own company, Marilyn Monroe Productions.

The Seven Year Itch turned out to be the comedy smash of 1955, and Marilyn returned to Hollywood in 1956 with a new contract that gave her more money and control over almost every aspect of her work.

“Are you the boss lady?” asked a woman reporter of Marilyn upon her return to L.A. “I am the president of Marilyn Monroe Productions,” she replied. The woman persisted: “You are wearing a high-necked suit, very different from the last time I saw you. Is this a new Marilyn?” Marilyn threw back her head. “No,” she said, “I’m the same person. But it’s a different suit.”

Ahead for Marilyn lay another failed marriage, to the playwright Arthur Miller, more battles with Hollywood, emotional problems, drinking, and drugs. No one who knew her well would ever have said, “She’s such a happy girl.” Yet it was her own self-loathing that drove her striving. Her struggle was heroic, and her accomplishments are ill-served when cast in terms of inevitable failure and victimization.

Had she lived, the white heat of fame would have cooled. In a different climate, she might have found what she desired. We would not talk of her as we do now, as a repository of fantasy and speculation. There would be no myth that her passing was somehow “correct”—the right place, the right year, the right age. She would speak for herself.

I don’t believe Marilyn planned to die. I think it simply happened to her that night—one wretchedly unhappy night she couldn’t escape. If we are to believe that her hand was on the phone when her body was found, it is likely she changed her mind. She wanted more time. This was Marilyn only weeks before she died: “I feel if I fulfill myself as a person, I’ll find myself as an actress. The thing is, it seems like I have a superstructure with no foundation. But I’m working on the foundation!”
Posted by Melinda at 1:08 PM No comments:

Finally!  I have always wanted the Franklin Mint to start making the Marilyn fashions available to purchase on their own.  Instead of having to buy a new doll each time I would prefer to just get the dress.  You can store the extra dresses in the trunk when not being worn by your doll.  They had released the early dresses years ago but nothing since.....until now!

I noticed today that both the Korea dress and Starlet Red gown are available from the Franklin Mint.  You can even purchase the microphone separately now!  Click on the images below to order from the US Franklin Mint.  Unfortunately, they don't ship outside the US.   If you live in canada you can order by going to Franklin Mint Canada.  Otherwise, I am sure they will end up on Ebay soon.

Posted by Melinda at 8:13 AM No comments:

Mattel is releasing a series called Blonde Ambition.  It features some of the most iconic blondes of Amercian history.  The first release will be Marilyn Monroe in a Travilla design.  She will be available in March 2009.  Some early press from Mattel indicated that it would feature Marilyn in a previously un-used dress.  However, they must have been referring to only Mattel products since the Franklin Mint has already done this dress. 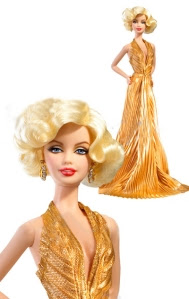 I added Kirsty and Susana's tattoos to the section here 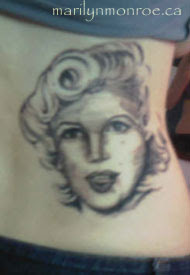 Posted by Melinda at 7:34 AM No comments:

Marilyn graces the cover of the latest B&W Magazine.  There is a 6 page story inside about George Zimbel's photos taken on the set of The Seven Year Itch.  Bascially, one page of text and 5 pages of photos. Included are some rare shots I have never seen before including one of Joe DiMaggio on the set.  Marilyn and Joe famously fought over this scene and it was the beginning of the end of their short marriage.

Thank you to Nicky for providing the scans! Here is a peek inside. 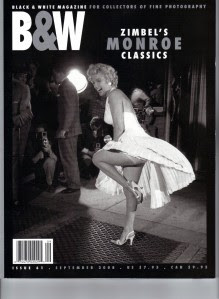 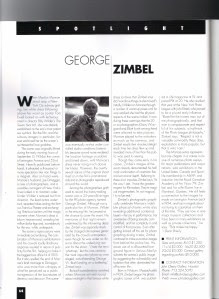 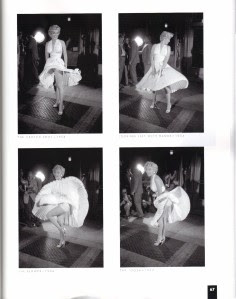 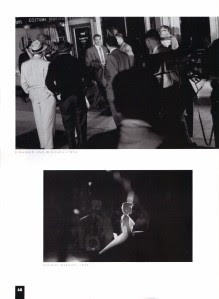 Posted by Melinda at 4:29 AM No comments:

I added Holly's tattoo to the tattoo section 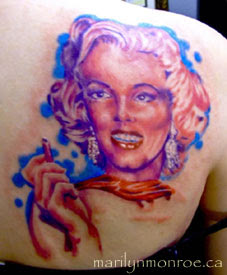 Posted by Melinda at 4:00 AM No comments:

I added Steve and Kelsey's tattoos to the tattoo section

Posted by Melinda at 6:20 AM No comments: