My Marilyn Collection on Exhibit from Sept 12 - Jan 11

Do you live in the Guelph/Kitchener/Waterloo area? Come and see my collection!

I am really excited to be showcasing my collection at the Wellington County Museum and Archives which is located between Fergus and Elora. Please visit the museum website for hours of operation and directions.PLAN YOUR VISIT

How did this exhibit happen?

Some of you have asked for the backstory to how this exhibit came about. Last year the Museum started an exhibit called "Wellington County Collects" where they invited local residents to share their collections. They have a large display case that is located in the Archives building (next to the Museum) and it features a new collector every 3 months. I contacted them earlier this year to offer my Marilyn dolls for this display.

The museum curator came to my house to view my collection. She took photos of my items (everything not just the dolls) and we firmed up the dates I would be featured. I came home from work the next day and there was a message that the Museum was so impressed they wanted to give me an entire room in the Museum instead of just the display case!! On top of that they were interested in holding an opening night event showing a Marilyn film!

I will also be interviewed for our community TV channel on the opening night so I hope to be able to share this with everyone.

This really is a dream come true for me. Living in a small town in a rural area I've never had an opportunity to share my collection like this before.

What will be happening on opening night September 12?

Gentlemen Prefer Blondes will be shown at 7pm in the Museum. The doors open at 6pm. It is a 1950's theme evening so I plan on dressing retro and I hope others will too. Snacks will be served and of course popcorn for the movie too.

You can look at the Marilyn exhibit throughout the evening. You will also be able to access the Archives building directly to see the doll display there.

Don't worry if you can't make it opening night - the exhibit will be running until January 11, 2015. If you do visit on another day don't forget to go next door to the Archives building or you will miss out seeing the dolls.
Thanks ever so to everyone that can make it out! 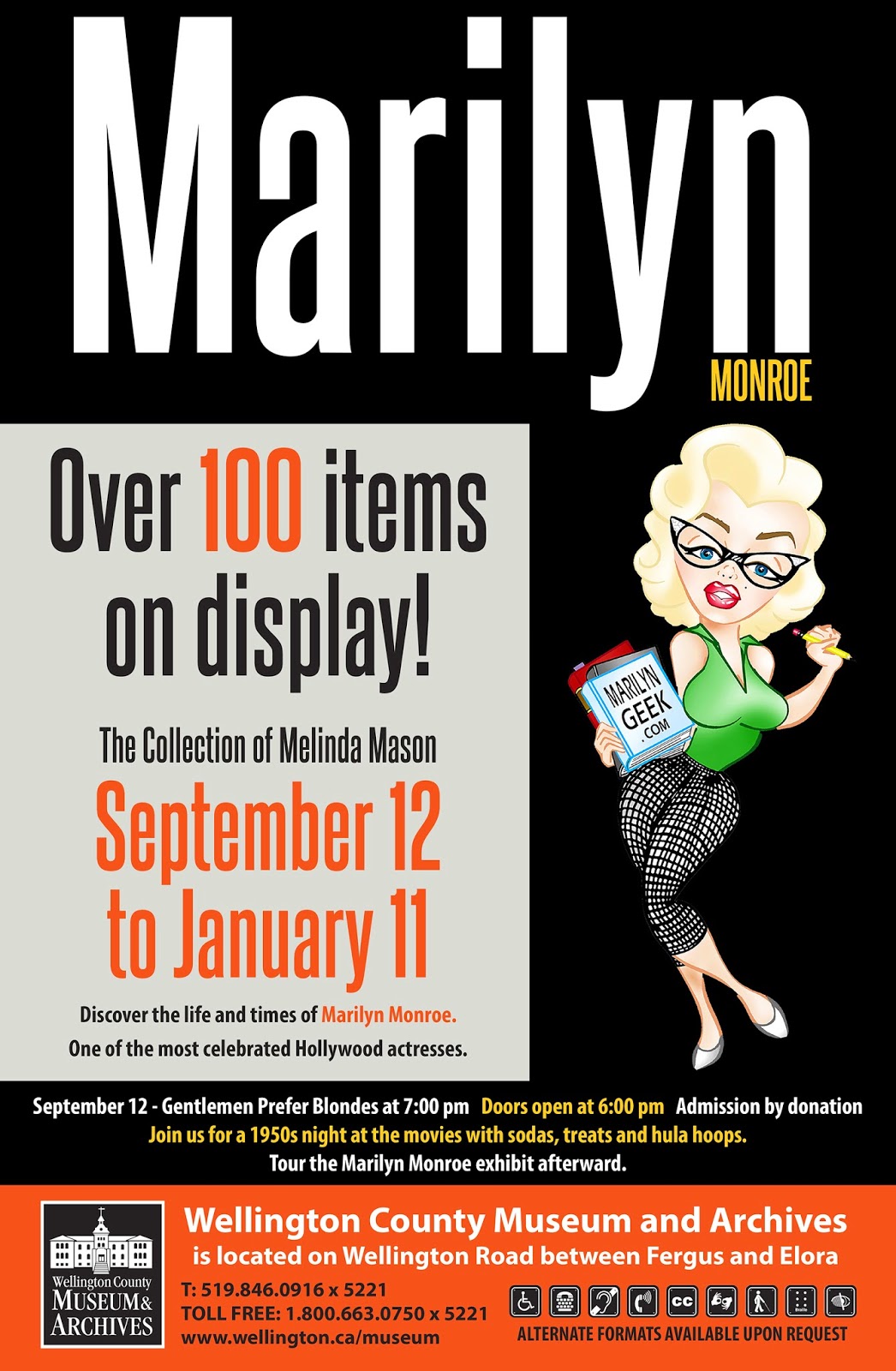 Posted by Melinda at 4:13 PM No comments:

Another of Marilyn's co-stars is gone.  Lauren Bacall who starred with Marilyn in How to Marry a Millionaire passed away on Aug 12 at the age of 89. 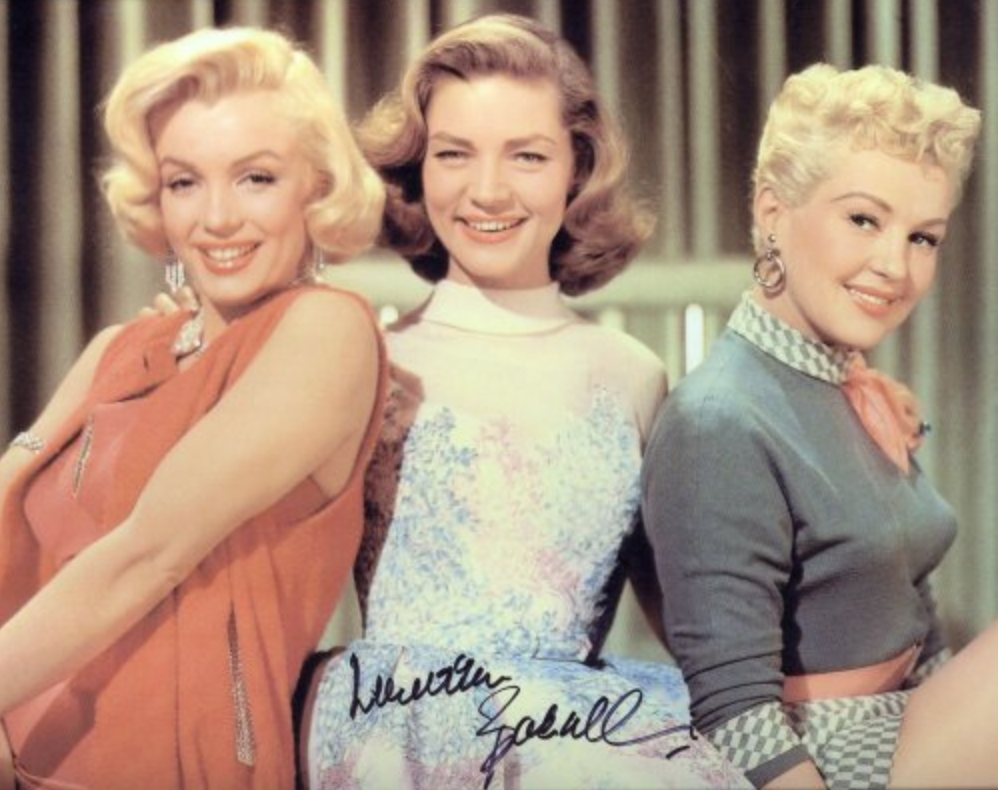 Moviegoers fell in love with Lauren Bacall about the same time Humphrey Bogart did: during the scene in her first movie, 1944’s To Have and Have Not, when she said, “You know how to whistle, don't you, Steve? You just put your lips together and . . . blow.”


Born Betty Joan Perske in the Bronx to Jewish parents from immigrant families (her Polish-born first cousin was Shimon Peres, future prime minister and president of Israel), Bacall took her mother’s maiden name, Bacal, after her father abandoned the family. She studied acting at the American Academy of Dramatic Arts in New York (a classmate was Kirk Douglas, a lifelong friend and a co-star in two movies made 49 years apart, Young Man with a Horn and Diamonds.) She made her stage debut at 18 in George S. Kaufman's Franklin Street, which closed before making it to Broadway, but her real big break came when, during her part-time job as a model, she landed the cover of Harper’s Bazaar. Nancy “Slim” Hawks (who later became better known as Manhattan socialite Slim Keith) saw the magazine and convinced her husband, A-list movie director Howard Hawks, to bring Bacall to Hollywood for a screen test. Once groomed for stardom by the Hawkses—who gave her the stage name Lauren (though her friends would always call her Betty), added a second “L” to her last name, bought her a new wardrobe, and taught her how to lower her vocal register (creating the famous deep and smoky growl known ever after simply as “The Voice”)—Bacall was ready for the lead role in To Have and Have Not, where her character even took Nancy’s nickname, Slim.

Working with Bogart, 25 years her senior, the 19-year-old was so shy that she was often photographed with her head down, her eyes cast up— but that pose became known as “The Look,” a sultry trademark gesture to go with the equally sultry Voice. The chemistry between the pair was evident, unfolding on-screen as it did in real life. Within three weeks, the stars were having an affair. Seven months after the picture premiered, Bogart split from his third wife (actress Mayo Methot) and married Bacall. Their marriage produced two children and the most productive period of her career, including three more pictures together. There was The Big Sleep, the Raymond Chandler mystery in which society dame Bacall send's Bogie's sleuth Philip Marlowe reeling. There was Dark Passage, an innovative thriller in which the first half of the movie is seen from Bogart's point of view, so that pretty much all you see is Bacall through Bogie's eyes. And there was Key Largo, a sort of rewrite of their first movie, with Bogart and Bacall falling in love while standing up to gangster Edward G. Robinson. And that was all, but those were enough to ensure that Bogart and Bacall topped the all-time list of couples who sizzled on-screen as much as they did in private.

During the 50s, Bacall also proved she could handle romantic comedy, in How to Marry a Millionaire (with Marilyn Monroe and Betty Grable) and Designing Woman (with Gregory Peck). By then, she and Bogart were such pillars of the industry that they were able to protest against the Hollywood blacklist and the Washington McCarthyism that had prompted it, without suffering any damage to their own careers.

Bogart died of esophageal cancer in 1957, when Bacall was just 32. She was then briefly engaged to Frank Sinatra (until their engagement leaked to the press, leading the singer to dump her over the phone). And she was married to future Oscar winner Jason Robards from 1961 to '69 (they had a son, actor Sam Robards), but they split up over the actor's alcoholism.

Bacall, who had bought an apartment in 1961 in New York’s legendary Dakota building (where she would live for the rest of her life), found a new home on Broadway, winning best-actress Tonys for 1970's Applause (the musical based on All About Eve, with Bacall playing the diva role made famous by her idol and friend Bette Davis) and 1981's Woman of the Year (in a role originated on-screen by another Bacall pal, Katharine Hepburn). She continued to shine on-screen in such films as The Shootist (her last romantic lead, opposite John Wayne, in his last movie), The Fan, Misery, and The Mirror Has Two Faces, where, as Barbra Streisand's imperious mother, she finally earned her first and only Oscar nomination at 72. (The Academy finally gave her an honorary award for lifetime achievement in 2009.)

-Vanity Fair
Posted by Melinda at 4:29 PM No comments:

For the first time ever the annual Memorial Service hosted by the Marilyn Remembered fanclub will be live streamed.  The service begins August 5th at 11:00am PST.

Posted by Melinda at 6:33 AM No comments:

Thanks to Danielle for passing along this information.  The National Museum of Funeral History in Houston, Texas actually has a display about Marilyn.

They have an original funeral card from her service and a genuine marble front from her crypt.  The vase and marker are replicas. 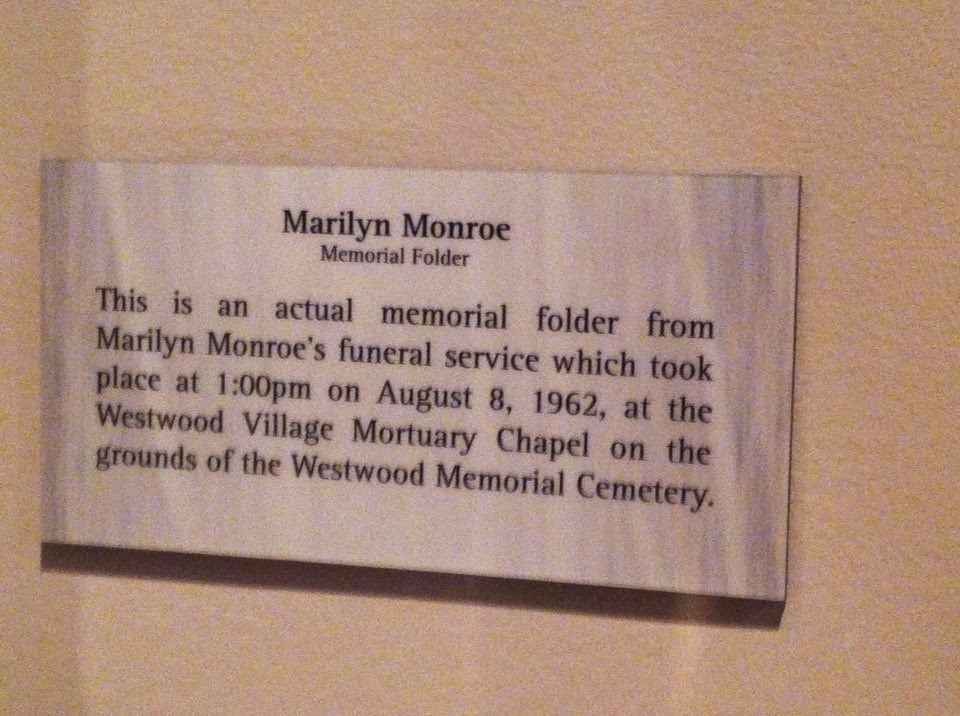 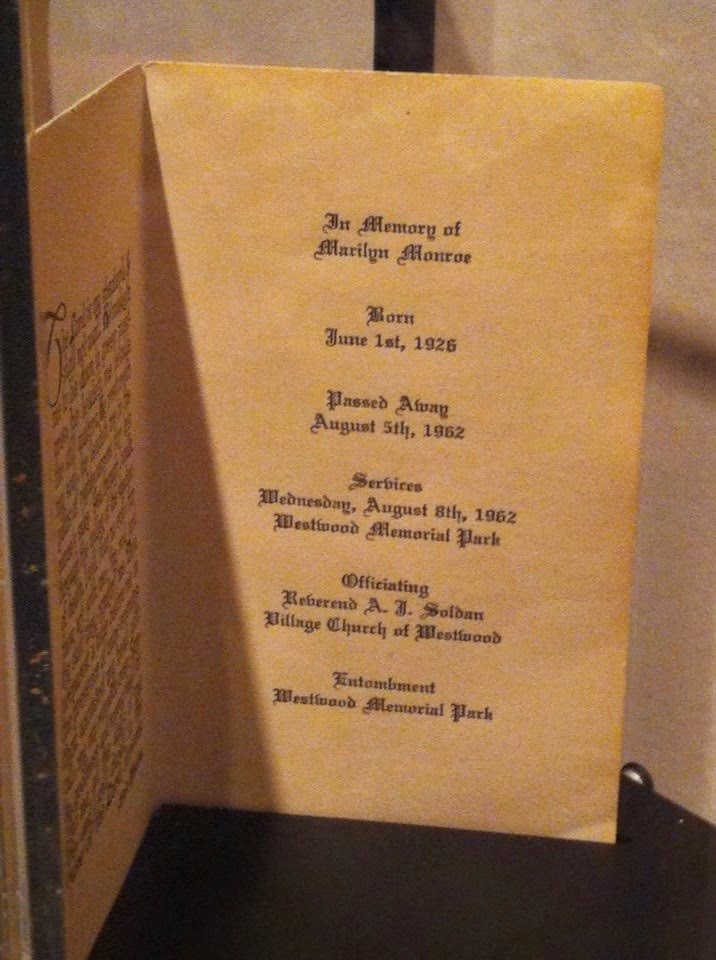 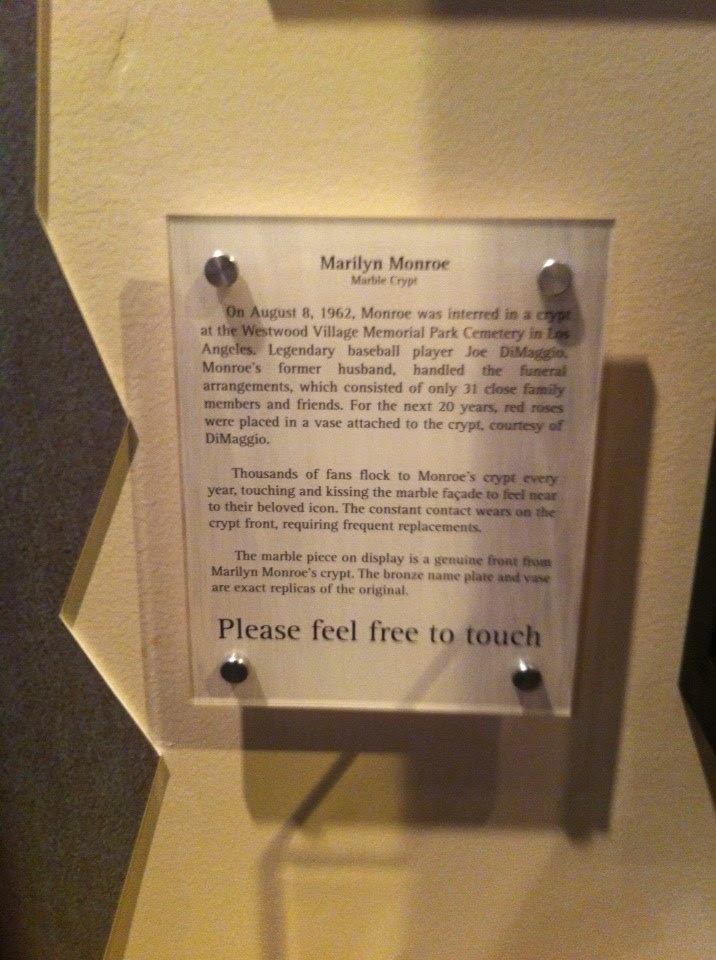 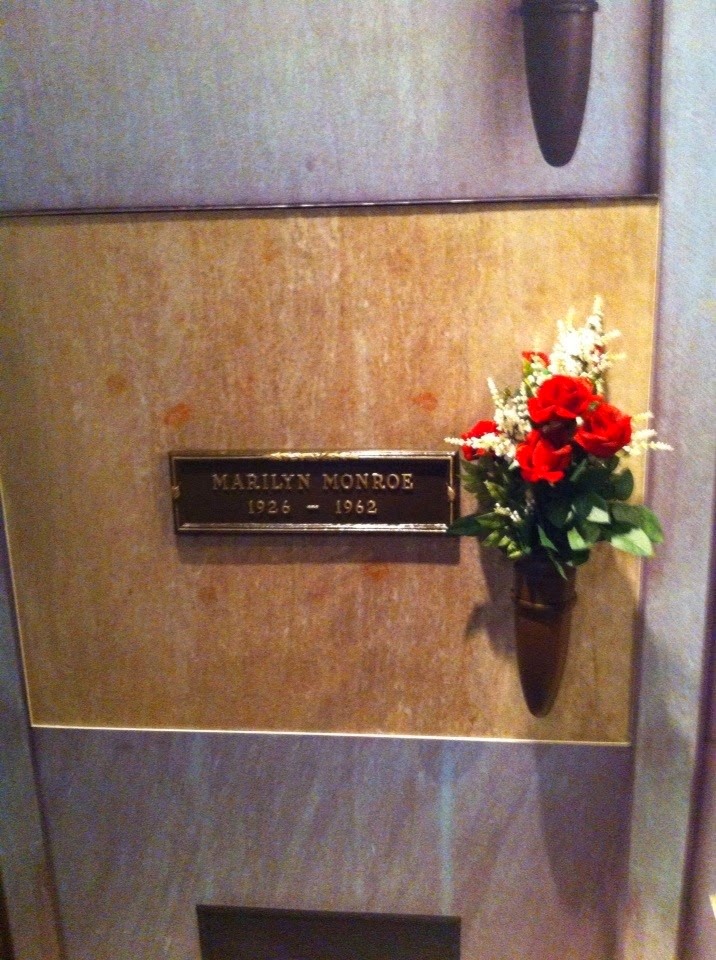 Posted by Melinda at 7:00 PM No comments: