Merry Christmas to all and to all a good night!

Wishing all of you a wonderful holiday season.  I hope Santa brings you lots of Marilyn goodies this year.  Can't wait to turn on the fireplace and settle in for some christmas movies tonight. 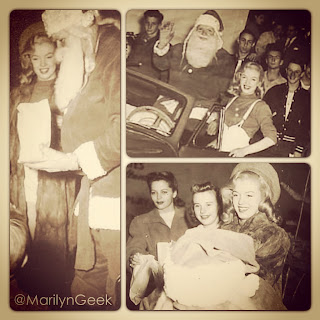 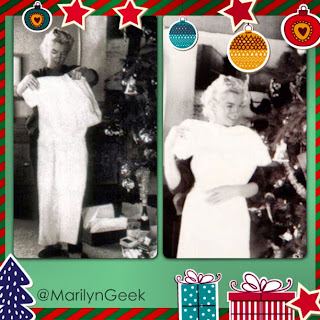 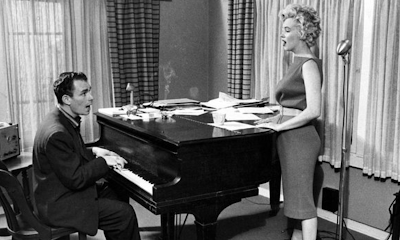 On Nov. 5, 1954, not long after Marilyn Monroe filed for divorce from Joe DiMaggio, DiMaggio was having dinner with Frank Sinatra when he heard, probably from a private investigator, that if he went to a certain apartment house on Waring Avenue in West Hollywood, he’d find her in the arms of another man.
There are different accounts of what happened later that night, but what is certain is that a party of men, including DiMaggio and Sinatra, showed up at the address and someone broke down the door of the ostensible love nest, terrifying the woman who lived there, Florence Kotz — sometimes identified as Florence Kotz Ross — who was in bed by herself.
“Mrs. Ross was fast asleep about 11 p.m. when five or six men suddenly battered down the back door to her apartment, tearing it from its hinges and leaving glass strewn on the floor,” The Los Angeles Times reported, adding, “A bright flash of light was shone in her eyes and she was confronted with a number of men, some of whom seemed to be carrying an instrument which at first sight she believed to be an ax.”
The incident, which came to be known as “the wrong door raid,” resulted in a lawsuit filed by Mrs. Ross against Sinatra, DiMaggio and four others, which was settled for $7,500. And where was Monroe? A female friend of hers claimed at the time that they had been together that evening, but years later, Hal Schaefer, a jazz pianist who was also Monroe’s vocal coach and who had become her confidant and romantic partner, admitted in interviews that he and Monroe were trysting in an apartment just a few yards away. 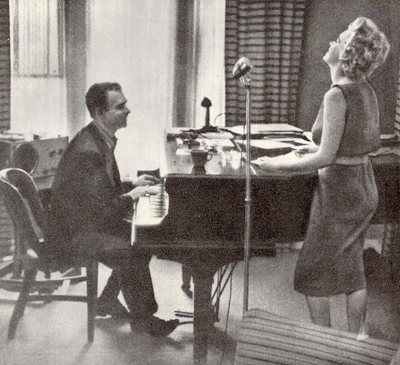 “We were very close to making love; I don’t remember the stage we were at, but I would say half-dressed,” Mr. Schaefer recalled. He added: “And all of a sudden for some reason, Marilyn got these vibrations, and we went over to the window and saw this group standing across the street, one of whom was Joe DiMaggio and another was Frank Sinatra. They all came en masse and broke this door in, demolished it. We scrambled to get out the back way, and we made it, luckily.”
Mr. Schaefer died on Saturday at 87 at his home in Fort Lauderdale, Fla. A friend, Charles Bryant, said the cause was congestive heart failure.
In his professional life as well as his personal one, Mr. Schaefer was often the least famous person in the room; his musical career was substantial but largely uncelebrated. A former prodigy who was inspired by the clean, tumbling melodic lines of Art Tatum, Mr. Schaefer played with big bands led by Benny Carter and Harry James and was the accompanist for Peggy Lee, Billy Eckstine, Vic Damone and other singers. Before he was 21 he led a trio that performed at the intermission of Duke Ellington concerts.
He was also an arranger and a modern jazz composer and for more than 50 years performed and recorded as a soloist and as a leader of small ensembles and jazz orchestras.
“A romantic with a rhythmic soul,” John S. Wilson of The New York Times called Mr. Schaefer after a performance at the Kool Jazz Festival in New York in 1982. “Mr. Schaefer is very much a mainstream pianist, but he has his own way of looking at the mainstream, enlivening the relatively standard repertory that he played with fresh and entertaining ideas.”
Mr. Schaefer probably made his biggest imprint as an arranger and vocal coach in Hollywood, where he often worked with the choreographer Jack Cole. He coached Monroe through “Diamonds Are a Girl’s Best Friend,” her signature number in the 1953 movie “Gentlemen Prefer Blondes” (he arranged the music as well), and Jane Russell, who also starred in that film. He also worked on other movies with Mitzi Gaynor, Betty Grable and Judy Garland. He wrote film scores for “The Money Trap,” a 1965 police drama with Glenn Ford, Elke Sommer and Rita Hayworth, and “The Amsterdam Kill,” a 1977 thriller with Robert Mitchum.
Harold Herman Schaefer — he legally changed his name to Hal — was born in Queens on July 22, 1925. His father, Louis, was a housepainter who loved jazz, kept a player piano in the house and taught himself to play ragtime by slowing down the mechanism so that he could memorize where to place his fingers. Young Hal attended the High School of Music and Art in Manhattan before he began playing professionally at hotels in the Catskills.
Mr. Schaefer’s first marriage, to Leah Cahan, ended in divorce. His wife of many years, the former Brenda Goodman, whom he met in 1973 when she was sent to him for voice lessons, died in 2000. A sister, Eve, died two years ago, and a daughter, Katie, died this year. He is survived by a brother, Robert, and a grandson.
Mr. Schaefer’s romance with Monroe did not leave him unaffected. After the “wrong door” episode, he was reportedly followed and threatened in anonymous phone calls, and though he remained deeply in love with her, he said, he had understood that he would not be able to hold onto her. On July 27, 1955, he tried to take his own life, he said, by washing down sleeping pills and Benzedrine with typewriter cleaning fluid.
“It seemed overwhelming to me,” he said. “I was still a young man, and I couldn’t really handle it. And I thought the only way out was for me to disappear.”
Monroe came to see him in the hospital, but their relationship flagged as he recovered.
“Marilyn was an unsettled soul,” Mr. Schaefer said. “She could never come to rest anyplace. So her falling in love with somebody I don’t think would ever have any long-range stability to it.”

For a timeline of the Marilyn connections who have passed away visit http://www.marilynmonroe.ca/camera/dearly/
Posted by Melinda at 2:25 PM No comments: