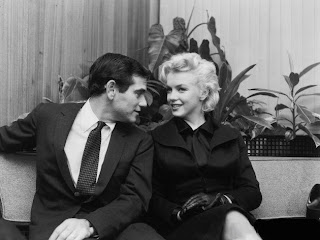 By Lisa Richwine
LOS ANGELES (Reuters) - A U.S. appeals court has upheld the right of a Marilyn Monroe photo library to license images of the film star taken by a celebrity photographer who was one of her business partners.
Milton H. Greene Archives Inc has been in a long-running court battle with Anna Strasberg, widow of Monroe's acting coach, Lee Strasberg, and her licensing agent CMG Worldwide, which controlled use of Monroe's image for years.
In a ruling on Thursday, the 9th U.S. Circuit Court of Appeals in California backed a lower court decision that allowed Greene Archives to license its images of Monroe.
The star's estate, however, said it still retained exclusive rights to the film star's likeness under federal law.
Greene was a fashion and celebrity photographer who became friends with Monroe during a photo shoot, and the two formed a film production company. At one point, Monroe lived with Greene and his family at their Connecticut farmhouse, where he produced several photographs of the star. Greene died in 1985.
The legal battle over Greene's images hinged on where Monroe was living at the time of her death on August 5, 1962 at age 36. The court ruled Monroe resided in New York and therefore she did not have the posthumous right of publicity based on the state's law.
"Because no such right exists under New York law, Monroe LLC did not inherit it ... and cannot enforce it against Milton Greene or others similarly situated," Judge Kim McLane Wardlaw wrote for the court.
Strasberg's Marilyn Monroe LLC sold its rights to the film star's persona in September 2010 to The Estate of Marilyn Monroe LLC, and Strasberg maintained a minority role.
In a statement on Thursday, the estate said the appeals court decision affected only publicity rights under state law and that its federal rights remained valid. "The Estate still enjoys the exclusive right to use Marilyn Monroe's signature, name, likeness, image, voice, or anything else associated with her persona," it said.
An attorney for Milton H. Greene Archives could not immediately be reached.
Interest in Monroe remains high. She is the subject of NBC television drama "Smash," a story about the making of a Broadway musical about the blonde bombshell, and last year's film, "My Week with Marilyn." Several books about her were released around the anniversary of her death.
Forbes magazine ranked Monroe as the third-highest money-maker in its annual ranking of "The Top-Earning Dead Celebrities," with income of $27 million in 2011, according to the court ruling.
Wardlaw wrote that the lengthy dispute over Monroe's persona "has ended in exactly the way that Monroe herself predicted more that 50 years ago," pointing to Monroe's quote: "I knew I belonged to the public and to the world, not because I was talented or even beautiful, but because I had never belonged to anything or anyone else."
(Reporting by Lisa Richwine; Editing by Kenneth Barry and Lisa Shumaker)
© Thomson Reuters 2012 All rights reserved.
Posted by Melinda at 7:26 PM No comments:

#MarilynMonroe - I was not that excited when I first posted about the new line of Tonner Dolls.  Mainly because I have seen all of those outfits on dolls before. In fact I have dolls wearing them right now.  I want to see something I don't have.  After all, I can only have so many dolls wearing the pink diamonds outfit ( I have 3 now).

The Fall Marilyn collection by Tonner has been released and is availble for pre-sale.  I am happy to report that they have some original outfits that have not appeared on other Marilyn dolls.

Two versions of the doll will be available; Diamonds or Pola outfit.  Each have different hair styling. 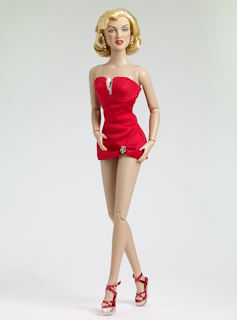 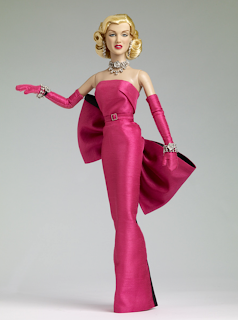 Once you have a doll you can purchase additional outfits for her!  This is where things get interesting.  A couple of these have never appeared on another Marilyn doll. 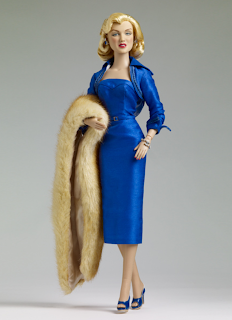 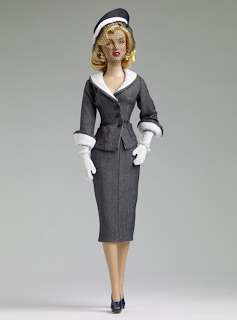 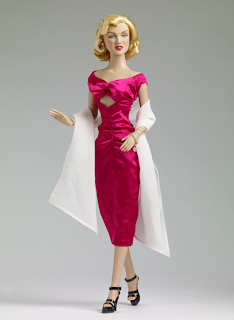 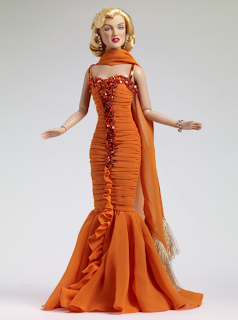 If you are interested in the new Marilyn Tonner dolls and outfits I recommend My Favourite Doll.  If you put "referred by MarilynMonroe.ca" in the comments section during checkout they will take 10% off your purchase.

Thanks to Dawn and Brittney for allowing me to display their tattoos on my website. 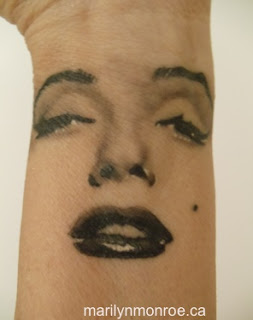 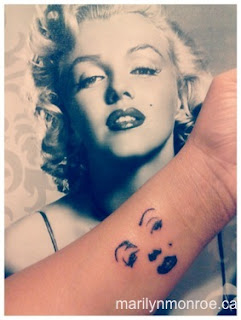 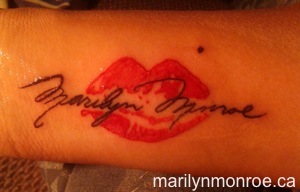 Posted by Melinda at 5:31 PM No comments:

Ever since I heard MAC would be producing a line of cosmetics based on Marilyn I was eager to see the designs.  I'm thrilled that they have chosen the black sitting.  They are set to be released in October.  Thanks to Sally for passing this along. 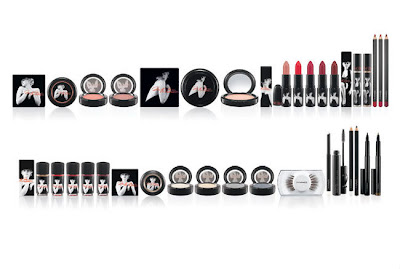 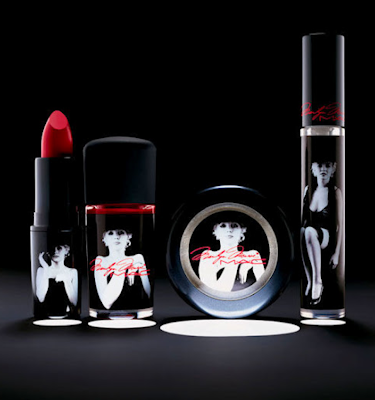 Posted by Melinda at 4:45 PM No comments:

I have added the following review to the book section of my website. 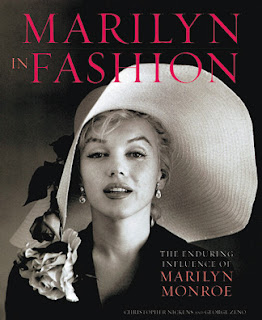 It is hard to believe that a book can come along and provide a fresh take on Marilyn.  But that is exactly what Marilyn in Fashion has done.
This book focuses on Marilyn's contributions to fashion and  it details the fashion designers she wore.  Each chapter focuses on a designer and features photos of Marilyn wearing the designs.  I really enjoyed learning more about the clothes I know Marilyn loved like Pucci and Ceil Chapman.  It was even more interesting to learn about others I had not heard of.
The book touches on an interesting observation about fashion during Marilyn's era.  The journalists and reporters  would never ask the question, "What are you wearing?".  So the designers themselves were not as well known as they would have been today.
I love the photographs that accompany the text.  It is obvious that they made an attempt to use rarer photos.  Starting with the book cover it is gorgeous and unique.  I easily counted 20+ photos I don't remember seeing before.  Collectors will be pleased with this book.
In summary, I would highly recommend this book.  Just when you thought you knew everything about Marilyn, here is a chance to learn more.

Please consider making your purchase through this link to Amazon.  Marilyn and the Camera gets a small percentage of each sale.  Thanks ever so.

Posted by Melinda at 6:31 PM No comments:

I've finally gone through all the photos and presented some of them in the TRAVEL SECTION of my website.  So if you are interested please have a look.

It was a fantastic trip and I am so glad I was there to experience it all.  It was a jammed pack week that is for sure.  I was so exhausted when I got home I needed another vacation :)  It was worth it though.  I will truly never forget this trip. 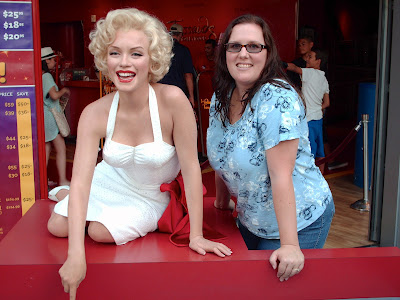 I was contacted by a lot of press while in Hollywood.  Too bad as I really did not have time for it.  There was a morning show from Detriot I would have liked to be a part of but I wasn't getting up at 5am for it :)  I did get a mention in USA Today which got picked up in papers everywhere.  When I got home my family had saved our local paper because the story was in there!  It was great to see Marilyn get the attention she deserves. 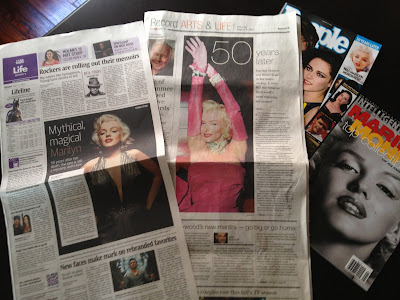 Posted by Melinda at 3:09 PM No comments: 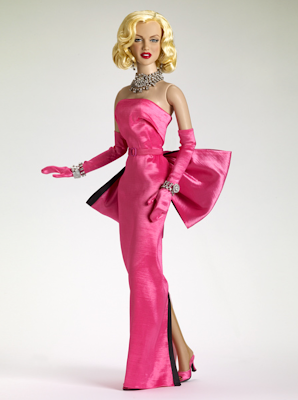 “We are so excited to have access to Twentieth Century Fox’s Marilyn Monroe movies!” exclaims Robert Tonner, CEO and world famous doll artist and sculptor. “We had so many ideas that we just couldn’t wait to get into our Design Room. Marilyn’s Fox films are so iconic, and it is a delight to be able to re-create Marilyn and bring her film essence to life.”

Tonner’s debut Marilyn doll was first revealed at the company’s 2012 May Collectors Convention during their dinner event inspired by Gentlemen Prefer Blondes. The event centerpiece was a 22” Marilyn Monroe doll, called Diamonds, which featured Marilyn in her famous pink satin dress, just dripping in ‘diamonds’. 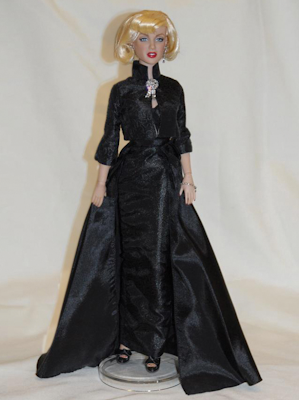 The 16” event souvenir for each attendee was called, Animal Magnetism, featuring Marilyn in another ensemble from Gentlemen Prefer Blondes: a black-on-black patterned dress with elegant side drapes, jacket and rhinestone pin. Both dolls quickly sold out, and are no longer available.

Like Animal Magnetism, the entire collection of 16” Marilyn Monroe dolls from the Fox Films, including Gentlemen Prefer Blondes and How to Marry a Millionaire, boasts a brand new Tonner doll body: The Starlet body, which consists of an ample Tyler bust line and a fuller hip. All dolls will also feature Marilyn’s blonde tresses, signature beauty mark, notable widow’s peak and sultry bedroom eyes. 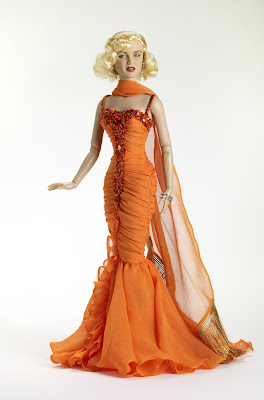 Each doll will exude the glamour and style that Marilyn displays in her Twentieth Century Fox film roles, and will include some of the ensembles that she made famous.

“Marilyn Monroe will forever live on as a Hollywood icon and this partnership will bring some of her most memorable film moments to life through all new merchandise,” said Jeffrey Godsick, President of Fox Consumer Products. 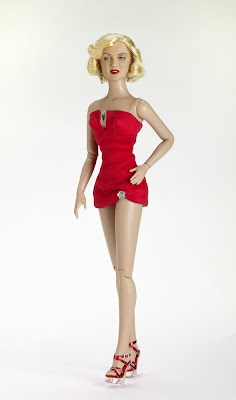 "The construction and detailing of the new Marilyn Monroe doll line produced by the Tonner Doll Company is exquisite. Her celluloid career at Twentieth Century Fox comes to life through these sculpts, and I'm impressed with the replication of her film wardrobe, in particular her costume jewelry. With the new 22" sculpt representing Marilyn in Gentlemen Prefer Blondes, diamonds truly are a girl's best friend. Monroe dolls from Tonner will be an essential for every doll collector and Marilyn Monroe fan."

Tonner Doll is no stranger to transforming old Hollywood into captivating vinyl miniatures, and has had great success in the past with likenesses such as Joan Crawford, Bette Davis, and Ava Gardner, which won a 2011 Doll of the Year Award.

Look for Tonner’s impeccable Marilyn Monroe movie role dolls in the fall of 2012. For more information, visit http://www.tonnerdoll.com
Posted by Melinda at 5:55 PM No comments:

I am back from my week in Hollywood for the Marilyn Memorial Events.  It was wonderful to meet so many fans.  It was an amazing trip and I am working on putting together a gallery of photos.  In the meantime, here is a photo from her grave on August 5. 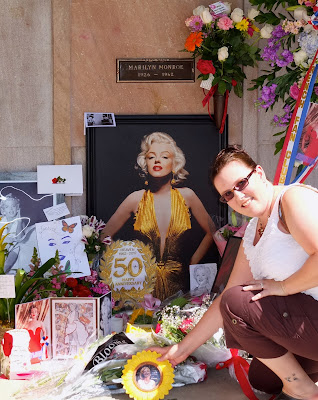 Posted by Melinda at 7:09 PM No comments: