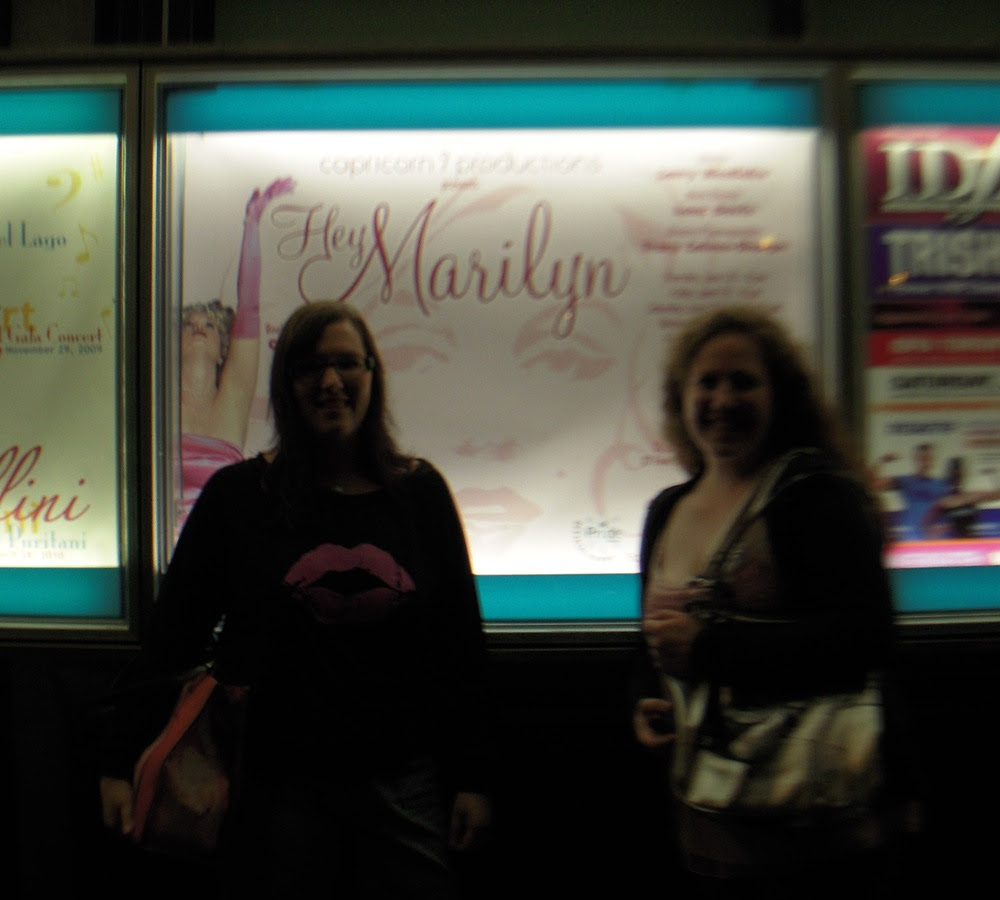 My friend Kim and I attended the evening performance on June 20, 2009  of “Hey Marilyn” in Toronto.  I wasn’t sure what to expect as this show was advertised as a “rock opera” style of musical.  I was imagining something like Tommy and it wasn’t really that far off.  There was no talking but instead the story was told through an original musical score and dancing.  The set design was a simple black stage with minimal props and costumes and live musicians sitting at the back.

There was a narrator who pieced together the various scenes from Marilyn’s life.  He had an amazing voice and did a great job.  The play started out with a young girl playing Norma Jeane.  She was miming playing with Tippy and an angry neighbour wanted the dog out of his yard.  I was worried it was leading up to a dreadful rape scene or something.  Instead the stage went black and Tippy was no more.

They could have done a better transition from Norma Jeane to Marilyn.  The little girl simply exited the stage after a song about the orphanage and then blonde Marilyn (?) appeared ready to wed Jim Dougherty.  Also, some of the other details were incorrect such as Marilyn being 18 at this time and they mentioned her Life Magazine cover being in 1951 instead of 1952.  However, I’m sure I was the only one in the audience to notice this.

The actress, Isabelle Kiraly, who played Marilyn did a good job.  Of course it was nothing like the performance Sunny Thompson did in Forever Marilyn.  Isabelle was not really trying to be the "real" Marilyn.  She sang the majority of the time in her own voice, however, there were 3 numbers where she “put on” an over the top Marilyn persona.  Throughout the show they would flashback to Korea and Marilyn singing/dancing with the troops. She performed 3 songs that were obviously based on Marilyn songs (ex. Do it Again and Heat Wave).  I enjoyed the first scene but I found flashing back 2 more times a little much.  It didn’t add anything to move the story along.   There was a lot of what I call interpretative dancing.  For example, Marilyn would be standing to the side of the stage with Joe singing to him while a girl in a nightie danced with a guy who had a NY Yankee logo attached to his Tshirt.

The storyline seemed to focus on the men in Marilyn’s life (Jim Dougherty, Johnny Hyde, Joe DiMaggio, Arthur Miller, Yves Montand and JFK) and how each of them left her like her mother before them.  The funeral scene for Johnny Hyde was really good.  This lead into one of the best scenes where Marilyn was singing from her heart that she could do more than be a dumb blonde.  Isabelle did a wonderful job on this.

At the intermission I was very impressed with the first act.  The cast was very talented and the choreography was outstanding.  I thought up to this point they had presented Marilyn in a pretty good light.  There was even a song where critics were singing about her movies and I appreciated that they indicated even though she played dumb blonde after dumb blonde – she was good.  They were giving her some credit.

Unfortunately, I can’t say that I enjoyed the second act as much as the first.  Which I guess is to be expected.  As a Marilyn fan it is hard to watch her fall apart or listen to people call her a bitch (which they did in the play).  They had some scenes about how late she was coming to set.  In one, Curtis and Lemmon in drag sang about her being drunk and something about going down on a guy when she was nine.  I knew right then they weren’t going to leave the childhood rape stories alone.  In a later scene she reveals that she was raped to Arthur who does not believe her.  A bright spot in the second half was a scene with Marilyn and Oliver where they sang about hating each others guts.  I found that pretty amusing.  They had the timeline off a bit by putting Some Like it Hot before Prince and Showgirl.

They left Marilyn’s demise as a drug overdose instead of getting into other theories.  It was hard to watch.  The final scene depicted a party at Marilyn’s home on August 4 and she was singing about wanting people to take a swim in her pool.  She goes from Dr. Engleberg to Dr Greenson getting and taking pills.  She is obviously drunk/drugged and stumbling.  Then she tells Mrs. Murray she is going to bed.  The scene changes to her trying to call for help on the phone until she dies.  It was very loud and climatic ….just such a stark constrast to the quiet emotional ending of Forever Marilyn (where I cried like a baby).  There was no pulling on heartstrings here it was not the effect they were going for.  Keep in mind this was a rock opera style play where they were singing that “Norma Jeane is dead”.  Not really grab a kleenex kind of stuff.

Anyway, overall I am very happy that I got the chance to see the play and I would recommend it.  The cast was very talented. However, fans that go to see it need to keep an open mind and just enjoy it for what it is…..an over the top musical ride through the life of Marilyn Monroe.
Posted by Melinda at 12:28 PM