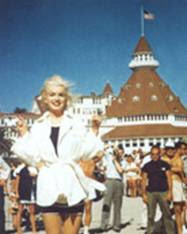 
Coronado, CA — Movie buffs and Marilyn Monroe fans won’t want to miss the chance to experience a great moment in Hollywood history – the Hotel del Coronado reels back 50 years to celebrate the debut of the 1959 comedy classic, Some Like It Hot. Directed by Billy Wilder and shot on location at The Del in 1958 and released the following year, the movie has since become a legend – voted the No. 1 comedy of all time by the American Film Institute. The Del will celebrate the film’s 50th anniversary with a spectacular, once-in-a-lifetime weekend starring special guests Tony Curtis, author Laurence Maslon, and the film’s Academy Award-winning producer, Walter Mirisch.

Mingle with the Stars!

Package includes: two-nights accommodations; Some Like It Hot DVD; a copy of Some Like It Hot: The Official 50th Anniversary Companion; and tickets for two people to the following exclusive events:

6pm – 9pm: CALLING ALL BAND FANS! Start the weekend celebration with a fun-filled reception and chef’s tasting menu reminiscent of the ‘50s. Meet Sweet Sue and Her Society Syncopators – the original girls in the band from Some Like It Hot. The evening will include a special cabaret performance with Broadway singer and performer Nancy Anderson, accompanied by Tom Lindblade. A Marilyn Monroe look-alike will also be on hand for photo opportunities.

5pm – 6:45pm: BEHIND-THE-SCENES CHAMPAGNE RECEPTION. Enjoy cocktails, appetizers and meet Some Like It Hotproducer Walter Mirisch and Laurence Maslon, author of the new book Some Like It Hot: The Official 50th Anniversary Companion. Mirisch will describe the making of this ground-breaking film, and Maslon will debunk myths and share hilarious tales. A book signing will follow.

7pm – 9pm: A NIGHT WITH TONY CURTIS. Reception and buffet dinner featuring classic menu items including some of Marilyn’s favorite dishes. Award-winning actor, author and artist Tony Curtis will recount the behind-the-scenes stories from the filming of Some Like It Hot and present a retrospective video of his career. He will also have his book Tony Curtis: An American Prince and artwork for sale.

Rates start at $340* per night at the Hotel del Coronado

*Starting rate shown is per room, per night, based on double occupancy. Offer subject to availability, some restrictions apply. Not valid for groups.

Billy Wilder’s hilarious film skillfully blends several American preoccupations – Marilyn Monroe, jazz, gangsters and drag – into one scintillating bootleg cocktail. The Prohibition-era story follows the exploits of Lemmon and Curtis, out-of-work musicians who accidentally witness Chicago’s “St. Valentine’s Day Massacre.” In a run for their lives, the men disguise themselves as women and join an all-girl band traveling by train to “Florida.” Here, the ukulele-strumming singer, played by Monroe, catches the eyes of both men, but it is Curtis’ character who assumes still another identity to successfully woo and win Monroe (he reinvents himself as an unlucky-in-love millionaire). Lemmon’s female character, meanwhile, is vigorously pursued by a bona fide millionaire, played by Joe E. Brown. The hilarious romantic romp is played out at California’s famed Hotel del Coronado – the resort’s spectacular Victorian architecture creating a perfect backdrop for the film’s 1929 setting. “The Del is so prominently featured in the movie, it almost becomes a fifth character,” says Christine Donovan, The Del’s historian.
Posted by Melinda at 12:09 PM