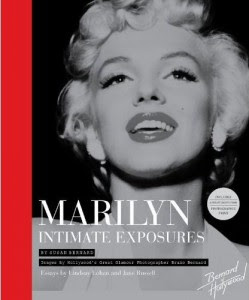 There was quite a bit of media coverage over this book simply because Lindsay Lohan wrote an introduction for it.  I personally don't have an issue with it.  I know many fans were turned off that she compared herself to Marilyn.  However, I don’t have a problem with Lindsay.  I think she has proven that she is a true fan of Marilyn (unlike other stars who get their MM tattoos removed).  My only gripe is that I would have liked to hear more about how Lindsay became a fan and what she admires in Marilyn instead of about Lindsay herself.

Perhaps to balance the introductions with new and old perspectives, Jane Russell was also included.  Most of what Jane has to say here is repeated from her autobiography.  However, it is touching to see that Marilyn was still on her mind even when Jane turned 90 years old.  Jane has since passed away so it is wonderful that Susan was able to include something fresh from her in this book.

This book is a visual journal depicting Marilyn’s career through the lens of Bernard of Hollywood.  It is an oversized gem at 10 x12 inches with 200 pages.  I am so glad they went with such a large scale to display the photos.  You can tell great care was taken in choosing the photos and the quality is fantastic.  It is a treat for the eyes with many full page and some two-page layouts.  In particular, there is a shot of Marilyn and Johnny Hyde where he is tying her party hat that is close up and stretches across 2 full pages.  While it is a familiar shot, this layout is new and the closeness of it makes it feel very intimate.   Another 2-page spread that caught my eye is a beautiful colour shot of Marilyn sitting on a globe.  The exact pose is new for me and the sheer size of it is spectacular.

Intimacy (as the title suggests) is what Susan Bernard must have been striving for in this edition of her book.  As Marilyn book collectors will be aware, Susan also published a book based on her father’s photos and journal entries called “Bernard of Hollywood’s Marilyn” in 1993.  While some photos are the same and many journal entries are identical, that is where the similarities end.  Marilyn Intimate Exposure is a far superior book.  It even includes a beautiful photographic print from the Seven Year Itch in an envelope at the back so you can frame it.

This time around Susan has included ephemera that her father kept.   It is wonderful to see his handwriting, envelopes, letters, contact sheets, etc.  It really helps establish that intimate feeling, like we are really looking through his things and his memories of Marilyn.  Visually it makes the book much more interesting than simply reprinting photos that we have already seen.  I love the look and feel of this book.  Susan has also done a wonderful job re-working her father’s journal entries and including some fresh material to tell his story of working with Marilyn.

The book covers Marilyn’s life from the young model, Norma Jeane, until her death.  I was impressed to see that Susan made an effort to dispel the lies that Robert Slatzer has told over the years (like being married to Marilyn).  There is even a conversation between Bernard and Pat Newcomb included disputing Slatzer’s claims.  For the conspiracy buffs there are etters and photos included, allegedly showing that Robert Kennedy was not in Los Angeles when Marilyn died.
Susan has done a fantastic job including something for everyone in this book. I highly recommend this book for new fans and also collectors who may already have Susan’s first book.

You can purchase this book through amazon at the link below...

You can find more information and over 90 book reviews in the Marilyn books section on my website at http://www.marilynmonroe.ca/camera/books/
Posted by Melinda at 10:43 AM