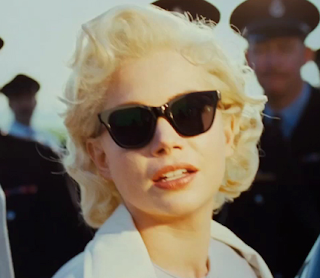 The best thing about this film is that it is going to bring new fans to Marilyn and remind older fans why they feel in love with her in the first place.  As I was leaving the theatre I listened to a couple of older ladies in front of me describe how difficult it must have been to work with Marilyn.  Then they conceded that it was all worth it in the end because of how she connected with the camera.  They both remembered seeing Gentlemen Prefer Blondes when it came out and expressed how much they loved her in that.  It left me smiling that she is still appreciated today.
Posted by Melinda at 2:02 PM