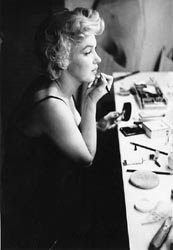 A long-running legal battle between Marilyn Monroe’s estate and a celebrity photographer over the rights to images of the iconic blond bombshell could be a thing of the past under a settlement up for bankruptcy-court approval.
Under the deal, Monroe’s estate would get nearly exclusive rights to all images of the movie star taken or acquired by deceased photographer Sam Shaw, who gave pop culture the enduring image of Monroe standing over a subway grate with a white halter dress billowing up around her.
In return, Monroe’s estate would guarantee the Shaw archive $3 million in royalties for the span of the five-year license, which the parties have the option to renew in five-year increments. The Shaw archive would retain the right to “exploit and license” the Monroe photos for “editorial licensing, fine art and exhibition purposes.”
Shaw Family Archives Ltd., which owns the Monroe photos and others taken throughout Shaw’s prolific career, says the deal not only resolves a long-running legal dispute but will also ensure its survival beyond the Chapter 11 case it launched last summer.
“The agreement is critical to the debtor’s effective reorganization,” the archive’s lawyerssaid in court papers filed Friday. “It provides security, a long-lasting business model and revenue streams for many years.”
What’s more, Shaw Family Archives said the deal will also allow it to use and license other photos of celebs in its vast collection, including John Wayne, Sophia Loren, Marlon Brando and Audrey Hepburn. Take a look at some of Sam Shaw’s shots here.
The U.S. Bankruptcy Court in White Plains, N.Y., is expected to consider the Monroe agreement at a Feb. 28 hearing.
Shaw, who died in 1999 at the age of 87, grew to fame by shooting the covers for Life and Look magazines in the 1950s and ’60s as well as still photos and posters to promote new Hollywood films. Director Billy Wilder hired Shaw to shoot a poster for his “Seven Year Itch,” which is when the photographer caught the iconic Monroe subway-grate photo.
-courtesy of The Wall Street Journal
Posted by Melinda at 2:39 PM