Not just any LBD! A little black dress worn by Marilyn Monroe sold at auction on May 8 for $348,000 at Julien's Auctions in Beverly Hills. The custom-made black crepe dress with a plunging v-neck was expected to go for $20,000 to $30,000, but far exceeded that. Monroe wore the dress to a cocktail party at the Beverly Hills Hotel in 1958 and also appears in it on the cover of the book Marilyn Monroe: From Beginning to End by Michael Ventura.
The cocktail dress was part of the Hollywood Legends auction at Julien's Auctions, which took place on May 7 and May 8. Other iconic items on the block included Monroe's MGM-branded swimsuit (winning bid: $84,000), Audrey Hepburn's straw hat from 1957's Funny Face(winning bid: $15,360) and the throne used by Elizabeth Taylor in 1963's Cleopatra (winning bid: $7,040).
More recent film memorabilia included an outfit worn by Angelina Jolie in 1999's Girl, Interrupted (winning bid: $1,792) and Alicia Silverstone's Batgirl costume from 1997'sBatman & Robin (winning bid: $12,800).
-The Hollywood Reporter 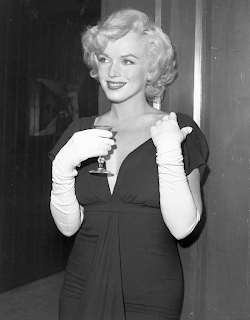 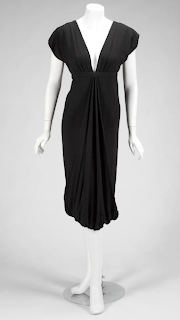