James Bacon has passed away.  Over the years, he has turned his casual interactions with Marilyn into a career.  He appeared in countless documentaries and Larry King specials claiming to have been Marilyn's lover and the one who picked her new name in Hollywood. 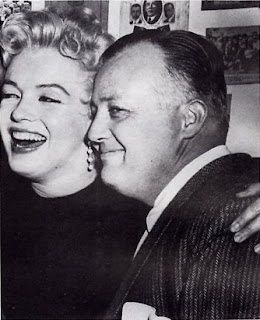 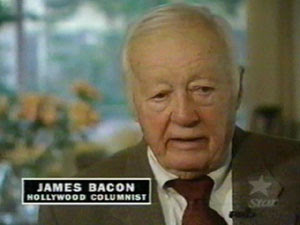 James Bacon, a friend and chronicler of the stars who worked for both the Associated Press and the Los Angeles Herald Examiner during the course of his long career, died Saturday (Sept 19) in his sleep of congestive heart failure at his home in Northridge, Calif. He was 96.

During his 75-year career as a newspaperman, columnist and author, Bacon was a confidant of Marilyn Monroe, hung out with John Wayne, knocked back drinks with Frank Sinatra and the Rat Pack, traded cigars with Winston Churchill and met eight U.S. presidents.

He spent 23 years with the A.P., followed by 18 years at the Herald Examiner. Most recently, he wrote a weekly column, recalling memories from Hollywood's glory days, for Beverly Hills 213, where his last column appeared on June 6.

He also authored three best-selling books, "Hollywood Is a Four Letter Town," "Made in Hollywood" and Jackie Gleason's autobiography "How Sweet It Is," which he co-authored.

Bacon belonged to an era when hard-drinking columnists mixed freely with Hollywood royalty.

In "Four-Letter Town," he claimed an affair with Monroe.

Pretending to be the coroner, he made his way through a police barricade to get Lana Turner's first-hand account of the fatal stabbing of her lover Johnny Stompanato by her daughter Cheryl Crane.

He accompanied Elizabeth Taylor's physician to her home to break the news of the death of her third husband, Mike Todd, in a plane crash.

He broke the story of Wayne's cancer, and he was the first to debunk Clifford Irving's hoax, "The Autobiography of Howard Hughes."

"Jim always made you feel like...he was a pal looking to hang out," Clint Eastwood once said of Bacon.

He was born James Richard Hughes Bacon on May 12, 1914 in Buffalo, New York. In pursuing his career, he was inspired by his father Thomas Bacon, a journalist who worked for William Randolph Hearst and Joseph Pulitzer.

After attending the University of Notre Dame and graduating from Syracuse University, Bacon got his first newspaper job as a summer intern at the South Bend (Indiana) News-Times before moving on to the Clinton County (Pa.) Times and the Syracuse (N.Y.) Herald Journal.

He joined the A.P. in Albany, N.Y. as a general assignment reporter covering New York state politics in 1942. Soon after, he joined the U.S. Navy as an ensign, serving in Panama and breaking Japanese codes during World War II.

Bacon's first marriage to Thelma Love ended in divorce. A daughter from that marriage, Carol Stermer, and a granddaughter Larkin Brooks are deceased.

He is survived by his wife of 44 years, the former Doris Klein; their children James B. Bacon of Granada Hills, Calif., Thomas C. Bacon of Manhattan Beach, Calif., and Margaret Bacon Smith of L.A.; two children from his first marriage, Roger Bacon and Kathleen Brooks, both of Ventura, Calif.; 15 grandchildren; seven great grandchildren; and a sister, Patricia Wilt of Lock Haven, Pa.

Funeral services will be private.

-courtesy of The Hollywood Reporter
Posted by Melinda at 7:47 AM