Actor Kevin McCarthy passed away on September 13, 2010.  He played Marilyn's husband in The Misfits.  Here is an autograph I was given by a friend. 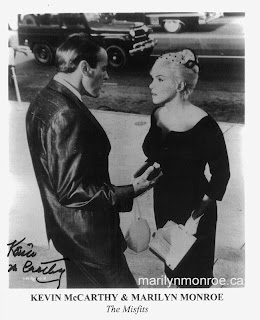 You can listen to an interview with Kevin in one of my podcasts. The show with his interview can be downloaded here...

Kevin McCarthy, a stage and screen actor best known for his role in 1957 sci-fi film Invasion of the Body Snatchers, has died. He was 96.
McCarthy died Saturday in Hyannis, Mass., according to Cape Cod Hospital spokesman Dave Riley.
In Invasion of the Body Snatchers, he played a terror-stricken doctor trying in vain to warn citizens of his small town of the invasion of pod people. He runs into traffic and shouts "You're next" and "They're not human" to people passing in their cars.
The role was so beloved by sci-fi fans, he was often asked to spoof it. He also has a cameo in the opening minutes of the 1978 remake of Body Snatchers and in Slipstream, an Anthony Hopkins film that has several references to the sci-fi classic.
The Seattle-born actor was nominated for an Academy Award for best supporting actor for his role in the 1951 film Death of a Salesman.
A veteran character actor, McCarthy had more than 200 roles on television and in film, and also acted on stage in New York and London.
McCarthy's sister was the author Mary McCarthy, who died in 1989. They and their two brothers lost their parents to the 1918 influenza epidemic and were raised by relatives.
McCarthy attended the University of Minnesota and began his acting career in 1938 with Abe Lincoln in Illinois on Broadway.
An early member of the Actors Studio, he was chosen by Elia Kazan to play Biff, the son of Willy Loman, in a London production of Death of a Salesman. He later won the same role on film.
He had a series of other film roles, including A Gathering of Eagles, Hotel, The Howling and Twilight Zone — The Movie.

In The Misfits, directed by John Huston, he played the estranged husband of Marilyn Monroe.
His television career included roles in The Survivors with Lana Turner, Flamingo Road, The Joseph Cotten Show and Breaking Point.
He also appeared in more than two dozen episodes of the CBS Radio Mystery Theater.
McCarthy is survived by his wife, Kate Crane, and their two children, as well as three children from a first marriage.

-Courtesy of CBC News
Posted by Melinda at 5:00 PM