#MarilynMonroe items up for Auction at Bonhams

Some really interesting items are coming up for auction at Bonhams on November 25, 2013.  Here are my favourites....

An original title made for River of No Return  ESTIMATE $700-$900
20th Century Fox, 1954. Carved wood, framed. Created by Pacific Title for the film's opening credits but not screen-used.River of No Return, a Western set in the Pacific Northwest in the 19th century, was directed by Otto Preminger and starred Marilyn Monroe and Robert Mitchum.
Overall: 45 x 19 1/2 in.; Wood only: approximately 39 x 14 in. 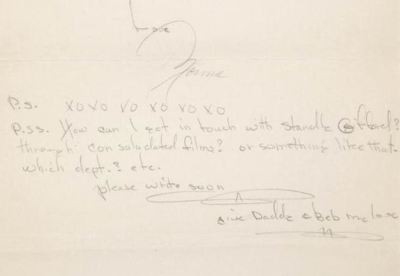 An eight-page handwritten letter from Marilyn Monroe to Grace Goddard  ESTIMATE $50,000-$70,000
Autograph Letter Signed ("Norma") in pencil, 8pp, 4to, [Van Nuys, CA, September 14, 1942], to Grace Goddard, regarding her wedding and married life, with original autograph transmittal envelope signed ("Mrs. James E. Dougherty").  16-year old newlywed Norma Jeane Dougherty writes to her foster mother Grace Goddard mentioning the man she believed was her biological father and describing her wedding and married life in vivid detail. Though Monroe's birth certificate lists a Martin Mortensen as her father, she always believed that her true biological father was a man named Charles Stanley Gifford, a co-worker of her mother Gladys at Consolidated Films during the 1920s. Monroe is known to have reached out to Giffords once she was an established celebrity, but he rebuffed her attempts. This letter reveals that by as young as 16—at the moment she begins her adult life as a married woman—she was interested in establishing a relationship with the man she thought of as her father.
The first line of this letter to Grace reads: "I want to thank you so much for writing Mom and explaining things about Stanley G. I'm sure she understands now." Norma, who had married Jimmy Dougherty just three months prior, describes life as a married woman: "He really keeps me busy cleaning the house and fixing meals, everybody told me that it is quite a responsibility being a house wife, and boy, I'm finding it out. But it really is a lot of fun. / Jimmy is so swell to me, in fact I know that if I had waited 5 or 10 years I couldn't have found anyone who would have treated me better. I just think the world of him and we get along so nicely. He is just so sweet about every little thing."Norma Jeane goes on to describe her new home, even drawing a floor plan diagram of the rooms and furniture. The next 5 pages list in exacting detail each guest invited to the wedding and the gift sent: "Mr. and Mrs John Ingram (He is the school teacher that was such a good friend of Jimmy's). He is also Doris Drenen's brother-in-law. And Doris Drenen is Jim's ex—remember? I remember only too well."She describes a gift from the Gaddis family: "The most beautiful cocktail set I have ever seen in my life. It is out of solid copper. The set consists of a huge round copper tray with a mat or cork on one side and asbestos on the other for hot drinks. Then there are eight copper glasses then there are eight little copper tray things for the glasses. Also there is a little copper bucket for grated ice. It is really beautiful." Other guests listed include Aunt Ana [Lower], Grace Godard's aunt, who fostered Norma Jeane from age twelve to age fourteen; and the Bolenders, who raised Norma Jeane from infancy until she was seven.Norma Jeane adds a poignant post script, again mentioning the man she thought of as her biological father: "How can I get in touch with Stanley Gifford? Through Consoladated [sic] films? Or something like that. Which dept?" 8 x 10 in. 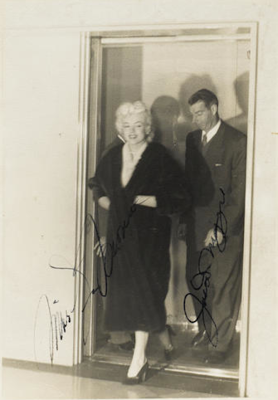 A signed photograph of Marilyn Monroe and Joe DiMaggio  ESTIMATE $3,000-$5,000
Silver gelatin print of Marilyn Monroe and Joe DiMaggio stepping out of an elevator, Monroe dressed in a long black coat and black pumps, looking up and smiling at the crowd and DiMaggio in a dark three-piece suit, looking down, c.1954, signed by each ("Marilyn Monroe / Joe DiMaggio") in black ink at lower margin.
Provenance: Profiles in History, Hollywood Auction 42, June 10, 2010, lot 170; Estate of Jerome Shochet
Photographs signed by both Monroe and DiMaggio are exceedingly rare as their marriage lasted only nine months.
4 1/8 x 5 3/4 in.
Posted by Melinda at 3:54 PM