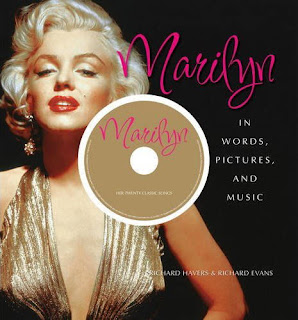 This book has been out for several months now but I just got my copy from the publisher.  I was pleasantly surprised by how enjoyable it is.
First, I was expecting a much smaller book when I heard it came with a CD of her music.  Instead it is quite large and there were several rarer photos which I liked.
It is a different kind of Marilyn book.  It is also a book about Hollywood so it might appeal to a larger group.  The authors talk about Hollywood in general and the stars that were famous during various times in Marilyn's life. Of course, it isn't perfect and there are some rather glaring text mistakes.  However, I think the concept behind the book and the great photos make up for that.  It does come with a CD of 20 Marilyn songs.
I expected the book to focus more on her music because of this but it didn't.  It is a unique book that I would recommend even though it features THE MOST OVER-USED MARILYN PHOTO on the cover.

The author had contacted me last year for permission to use a photo of my Marilyn calendars he saw on my website HERE.  They appear on page 107 as a FULL PAGE!!!!
I was very excited to see this.  I was also thrilled to see that MarilynMonroe.ca was listed in the resources section as one of the best websites :)

You can order this book below through Amazon...