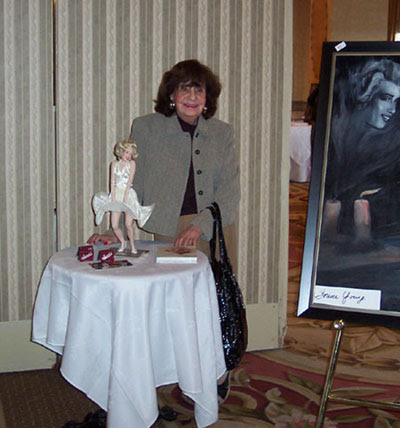 Well, there is no love lost for most Marilyn fans at the passing of Lena Pepitone.  I took this photo of her in 2005 at an auction that was held in Niagara Falls.  She spoke very little english so I was not able to really ask her any questions.  A few years ago, I was put in touch with her to be on my podcast.  When I called I was informed by her son that she charges $400 for a half hour interview.  Give me a break.  She was always out for the money.

Maid for Marilyn Monroe dead at 86
By JAMIE SCHRAM
An Upper East Side woman who worked as a maid for Marilyn Monroe and once wrote a tell-all book about the iconic American movie star was found dead in her home today.
Lena Pepitone apparently died of natural causes and was found about midnight by an acquaintance in her apartment on at 309 East 76th Street, a relative told The Post. She was 86 and had a heart condition.
A friend became concerned after she couldn't reach her by phone and went to her apartment. She couldn't get inside, but noticed the lights were on and heard the TV, sources said.
She called police, who climbed up a fire escape, entered the apartment through a window and found the body on the floor.
"My aunt Lena, I think that she’s probably the last living person who worked for Marilyn Monroe," said retired NYPD Sgt. Steven Cataneo.
Pepitone co-wrote "Marilyn Monroe Confidential" published by Simon & Schuster.
Cataneo said his aunt was a fabulous cook and seamstress who made a last-minute repair to the dress the blonde bombshell wore when she famously serenaded President John F. Kennedy by singing "Happy Birthday to You" at Madison Square Garden in 1962.
In her book, Pepitone said Monroe laughed at rumors that she was having an affair with Kennedy or his brother Robert.
Pepitone, who started working for Monroe in 1957, quoted the actress as calling the Kennedy brothers "cute" and saying she liked them because they were "funny and smart."
"But I remember her insisting, 'They're not my type. They're boys,"' Pepitone said.
Cataneo said his aunt cooked for Monroe and all her friends – including Frank Sinatra – as well as for her then-husband Joe DiMaggio.
"My aunt could cook. Italian food. Veal, pasta, sauces. Meatballs. The woman could cook," Cataneo recalled.
-New York Post
Posted by Melinda at 7:28 AM