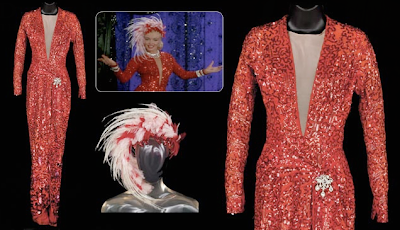 On June 18, a pretty extraordinary auction will be taking place in Beverly Hills by Profiles in History. Actress Debbie Reynolds is parting with her collection of Hollywood memorabilia.  She gathered these pieces in the hopes of someday opening a museum. Unfortunately, due to finances this dream did not come true and she decided to sell. The Marilyn dresses are all instantly recognizable to fans; River of No Return, Little Rock, Heat Wave and the most iconic of all Seven Year Itch.  The white dress is expected to sell for over $1,000,000.


I am curious to know if Profiles in History will include this auction in their TV series, Hollywood Treasures.  I have enjoyed watching it.  It follows around the Profiles in History team as they track down items and prepare for auctions.  The end of each episode features the actual auction and what the pieces sold for.  When I heard the news that Reynolds decided to go with Profiles for her sale I was hopeful it might be featured at some point.

CONFIRMED: It has been reported that she will appear in a June 15 episode showing off her collection!

You can soon own a piece of Hollywood history, thanks to actress Debbie Reynolds.
For decades, Reynolds collected some of the big screen's most iconic props and costumes. But now, she's putting them on the auction block.
CBS News National Correspondent Ben Tracy spent some time with Reynolds, known for her roles in "Singin' in the Rain" and "The Unsinkable Molly Brown," to find out why.
The 79-year-old star is saying good-bye to the dresses she wore in her movies, selling them off along with hundreds of other Hollywood treasures she's purchased, mostly at studio auctions over the past four decades.
Reynolds told Tracy she began collecting the costumes for emotional reasons.
She said, "I couldn't believe that they were getting rid of all these iconic pieces that I considered to be historical and should be saved."
Reynolds has a pair of "Wizard of Oz" ruby slippers worn by Judy Garland. She also owns Julie Andrews' dress and guitar from "The Sound of Music."
Some of the centerpieces of the collection include the famous Oscar-winning fashions worn by Audrey Hepburn in "My Fair Lady" and the pleated, white "subway dress" worn by Marilyn Monroe in "The Seven Year Itch."
Though Reynolds wouldn't disclose how much she paid for the Monroe dress, she said it's expected to bring in more thsn $1 million at auction.
Reynolds said, "I paid a lot, but not that!"
As Reynolds and Tracy walked through the collection, Tracy remarked how small the actresses' waists were.
Laughing, Reynolds said, "Yeah, we've all changed since that time."
Reynolds' collected the costumes with the dream of one day building a museum. But development deals kept falling through, putting her deeper in debt. The auction is designed to pay off those debts.
Reynolds said she's "devastated" and "very saddened" that her idea never came to fruition.
"(I'm) very disappointed that I never could get the right people interested," she said. "At least, I never found them."
Tracy asked the star, "You talk about, this wasn't cheap. That you spent a lot of money, you had to use your credit card. Did you ever get to a point where you said, 'Whoa, I'm buying too much stuff?"'
"Oh, yes," Reynolds said. "It was always too much. But then, life should be that. Either full of life, or no life."
The star said she wanted to have the auction while she could be a part of it and make sure the costumes go to "special homes."
"If you wait 'til you pass away, what good does that do?" she said. "So, I'm being selfish, in a way, by passing them along while I'm still alive."