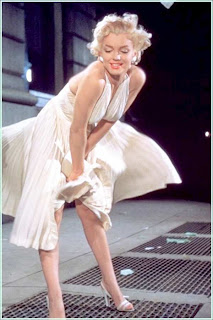 The dress, which is currently owned by the movie star Debbie Reynolds, will be auctioned off on June 18 in Los Angeles.

“Your donation will protect the legend and legacy of an American icon,” the company said on the official site of its nationwide “SAVE-THE-DRESS” campaign to rescue the “White Dress made famous by Marilyn Monroe.”

According to an auction house, the dress is said to be worth between $1 million and $2 million.

A scene from the film shot atop a New York City subway vent, in which Monroe’s white dress is fluttered upward by gushing air from a passing train made the actress a superstar. The image of the actress in the particular scene is considered an all time fashion moment worldwide.

“The timeless image of Marilyn Monroe in her legendary white dress has been indelibly etched in the minds of so many around the world. Her legacy and this priceless dress belong to the people, and shouldn't be hidden away from public view. Ensure that this incredible piece of Hollywood history remains accessible to all – where it belongs – in New York City,” the company said.

The question has been raised as to what exactly they are going to do with the money if they are unsuccessful in acquiring the dress at the upcoming auction.  Donors will not get their money back and let's be honest it is highly unlikely this internet website is going to raise enough money to win the dress at auction.  After all, the estimate for the dress is $1,000,000 - 2,000,000 dollars.  The auction takes place on June 18 through Profiles in History.
Posted by Melinda at 8:37 AM