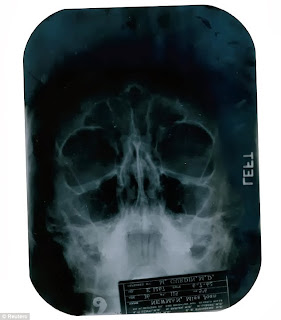 It appears that after all of these years evidence has come forward that Marilyn did indeed have some cosmetic surgery.
(Reuters) - A Southern California plastic surgeon said on Wednesday he is behind the auction of a physician's notes that shows actress Marilyn Monroe had undergone cosmetic surgery, and he will donate the proceeds to assist U.S. veterans with medical work.
Norman Leaf, who had previously requested anonymity, told Reuters that interest in the auction of the notes along with a set of X-rays caused him to come forward.
The set of six X-rays and the file of doctors' notes offer a partial medical history of the Hollywood sex symbol from 1950 to 1962 and are expected to fetch between $15,000 and $30,000.
The auction will be held on November 9-10 by Julien's Auctions, a Beverly Hills, California, auction house.
The notes were written by plastic surgeon Michael Gurdin and confirm speculation that Monroe, who epitomized Hollywood glamour and set a standard of big-screen beauty in the 1950s, went under the knife for cosmetic reasons. 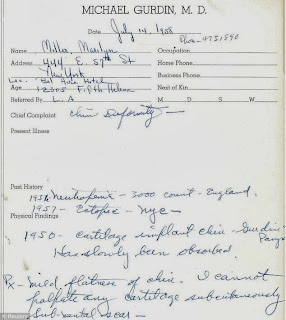 "They had put a chin implant in and it was made of carved bovine cartilage," Leaf said of Monroe's 1950 cosmetic surgery. "They didn't have silicone chin implants in those days."
Monroe's biggest films, such as 1953's "How to Marry a Millionaire," 1955's "The Seven Year Itch" and 1959's "Some Like It Hot," were all shot after 1950.
Leaf, 72, added that the "Gentlemen Prefer Blondes" actress also underwent a small cosmetic procedure on the tip of her nose at that time too.
Gurdin's notes indicate that Monroe visited him in 1958 complaining of a chin deformity and he noticed the implant had dissolved.
"As what typically happens with that. It absorbed over the years," Leaf said. 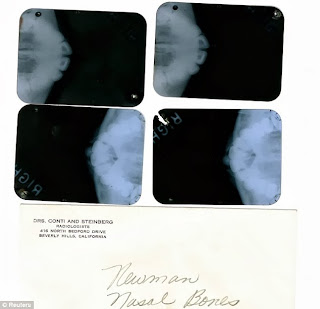 The X-rays are dated June 7, 1962, after Monroe saw Gurdin following a late night fall and two months before the actress would die at age 36 from an overdose of barbiturates.
Leaf, who began a medical partnership in Beverly Hills with Gurdin in 1975, said he did not know he was in possession of the files until about 20 years ago, when he was made aware of Gurdin's old charts that were hidden away storage.
"I've been looking at it and treasuring it and keeping it under lock and key and hidden away in my safe," Leaf said of Monroe's files and X-rays.
Proceeds from the sale will be donated to nonprofit foundation Rebuilding America's Warriors, which helps U.S. veterans receive free reconstructive surgery on injuries that are not covered by government benefits, said Leaf, who is the foundation's medical director. 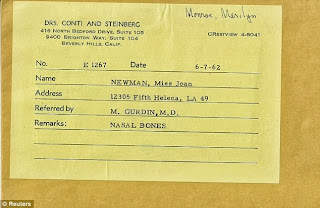 "I think it's the perfect link because Marilyn entertained the troops in Korea (in the 1950s), so this is a chance for her to help the troops out again," Leaf said.
Leaf self-published a memoir, "Are Those Real? True Tales of Plastic Surgery from Beverly Hills," in 2010 in which he detailed Gurdin's notes on Monroe.
Posted by Melinda at 5:40 PM